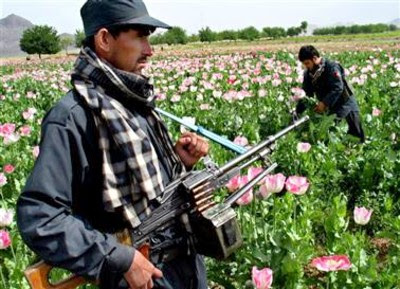 The occupation of Afghanistan will include a farming mix of opium and corporate genetically modified seed and herbicides.

The Afghan opium crop and the resulting drug trade create a multitude of problems for a great number of people. It also creates a monster of a money trail from the farmers right on up to the globalist world banking system.

It doesn't matter if you are totally anti-drug or for legalization to stop the insane 'war on drugs' or somewhere in between, there are a few corporate/government/fascist side trails that should be looked at.

Monsanto is not one to shy away from exploiting the US war/occupation of Afghanistan. It plays one side for the made for TV crop eradication programs and the other as 'friend' who will give the Afghani farmers 'free' seed if they won't grow their only cash crop.

Although opium poppy production is reported to have decreased 19% in 2008, Afghanistan remains the world's largest producer of the drug, reports The Raw Story, which quotes new Obama-administration ambassador Ambassador Richard Holbrooke speaking at the Brussels Forum conference:
"The United States alone is spending over 800 million dollars a year on counter-narcotics. We have gotten nothing out of it, nothing."

One eradication method is aerial fumigation, a Bush-era policy of spraying chemicals such as Monsanto herbicide Roundup Ultra to eradicate the crop. Aerial fumigation -- one of the widest anti-drug efforts in Afghanistan -- began in 2008.

Roundup Ultra, which has glyphosate as an active ingredient, has also been blamed for health problems in people living near the targeted sites
{more}

From Robert Soave...my outrage wasn’t triggered until the very end of the article {The Wall Street Journal (U.S. Defines Its Afghan Strategy, 03/27/09) }, where the plan for handling Afghanistan’s illegal opium trade was detailed. Farmers who grow opium — an illegal substance used to produce drugs like heroin and morphine — will be offered wheat seeds for free from either Afghan or U.S. officials to start growing wheat instead of opium. Then the kicker comes: “If the farmers refuse, U.S. or Afghan personnel will burn their fields, and then again offer them free replacement seeds.” Let’s repeat that for effect — U.S. personnel will burn their fields and then pressure the farmers again. And we wonder why the Afghan people have not yet warmed to our presence in their country. {more}

The genetically modified infestation into Afghan farming has been going on for awhile.

Soya has never been grown in Afghanistan and it doesn't form part of the country's culinary tradition, but a new programme, supposedly devised to combat malnutrition, plans to change all that. 1 USAID has funded Nutrition and Education International (NEI), set up by Nestle, to teach Afghans to sow and eat soya beans. 2 NEI is linked to the World Initiative for Soy in Human Health (WISHH),3 which was founded by the American Soybean Association (ASA) in 2000,4 to organise the distribution of free soya milk to pregnant women and infants throughout the developing world. WISHH works with the North American Millers' Association (NAMA), whose members include global giants ADM, Bunge Milling and ConAgro. In Afghanistan NEI works with Stine Seed Company, Iowa, and Gateway Seed Company, Illinois, both of which supply it with genetically modified Roundup soya and Roundup-Ready herbicide to be sold on to the farmers. According to NEI, it distributed two tonnes of genetically modified soya seed in Afghanistan in 2005. {more}


The seed fascism in Iraq seems to have worked so the same plan is being implemented in Afghanistan.

The Real Victor in Iraq: Monsanto

It now looks like Monsanto is going to be the real victor in Iraq thanks to a postwar document known as Order 81.

Part of the infamous 100 Orders, Order 81 mandates that Iraq’s commercial-scale farmers must now purchase "registered” seeds. These are available through agribusiness giants like Monsanto, Cargill Corporation (a private company) and the World Wide Wheat Company (also private), but Monsanto is far and away the most significant player in the registered seed market.

Originally developed to avert world hunger (at least according to Monsanto), these GM crops not only do not produce more than their non-modified cousins, but the herbicide Roundup, developed in tandem by Monsanto to treat GM fields, is becoming increasingly ineffective. This has led to more herbicide purchases among farmers, greater profits for Monsanto, increasingly smaller yields, and greater environmental pollution overall.


Roundup, a glyphosate, is the direct descendant of Agent Orange (also produced by Monsanto), and is especially toxic to marine animals. Glyphosates, known as endocrine disruptors, are being increasingly implicated in neurological disorders, DNA damage and even death .

Order 81, by first forcing Iraq’s farmers to use GM seeds, and then by declaring natural seeds an infringement on Monsanto technology, will result in the sorts of tragedies seen elsewhere in the developing world, reducing Iraq’s farmers to drinking field-grade herbicides to escape financial catastrophe.

Nor will the Iraqi people benefit in terms of more food. Order 81, mandated under the dystopian title "Plant Variety Protection,” turns the agricultural world on its head by defining indigenous crops as invasive and GM crops as uniform and stable. Moreover, the six varieties of wheat developed for Iraq are primarily used in pasta. Since the Iraqis don’t eat pasta, one can only assume these food crops are destined for Western nations, leaving the average Iraqi that much closer to starvation.

Order 81, carefully crafted to look like humanitarian legislation aimed at rescuing a country decimated by half a decade of war, is in fact a Monsanto power play under U.S. government sponsorship. Farmers who do not comply will have seeds, farm implements and even land seized.

The infamous 100 Orders, of which 81 is only an instance, are clearly a ploy to allow multinationals like Monsanto to take over an entire nation . As Iraqi resentment over this privatization grows, expect continued resistance, more deaths, and ultimately a failure of democracy. {more}

The ones you don't kill, you must rape. That sounds like a good motto for the occupying empire and their corporate sponsors.

From the Tennessee hills.
Related Topic(s): Afghanistan; Afghanistan War; Agribusiness; Destroying Non-corporate Competition; Monsanto; Opium, Add Tags
Add to My Group(s)
Go To Commenting
The views expressed herein are the sole responsibility of the author and do not necessarily reflect those of this website or its editors.