By Greg Palast
Special to The BRAD BLOG

Boo-hoo! I made Tim Griffin cry.

He cried. Then he lied.

Griffin is the Rove-bot exposed by our BBC Newsnight investigations team as the man who gathered and sent out the infamous ‘caging’ lists to Republican state chairmen during the 2004 election.

Caging lists, BBC discovered, were used secretly as a basis to challenge the right to vote of thousands of citizens - including the homeless, students and soldiers sent overseas. The day after BBC broadcast that the Chairman of the Judiciary Committee, John Conyers, sought our evidence on Griffin, Tim resigned his post as US Attorney for Arkansas. That job was a little gift from Karl Rove who made room for his man Griffin by demanding the firing of US prosecutor Bud Cummins.

Last week, our cameras captured Griffin, all teary-eyed, in his humiliating kiss-off speech delivered in Little Rock at the University of Arkansas where he moaned that, “public service isn’t worth it.”

True. In the old Jim Crow days in Arkansas, you could get yourself elected by blocking African-Americans. (The voters his caging game targeted are - quelle surprise! - disproportionately Black citizens.) 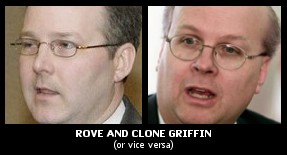 (Image by Unknown Owner)   Details   DMCA
But today, Griffin can’t even get an unemployment check. When he resigned two weeks ago following our broadcast, the cover story was that the voter persecutor-turned-prosecutor had resigned to work for Presidential wannabe Fred Thompson. But when Thompson’s staff was asked by a reporter why they would hire the ‘cagin’ man,’ suddenly, the ‘Law and Order’ star decided associating with Griffin might take the shine off Thompson’s badge, even if it is from the props department.

Griffin, instead of saying that public service “isn’t worth it,” should have said, “Crime doesn’t pay.” Because, according to experts such as law professor Robert F. Kennedy Jr., ‘caging,’ when used to target Black voters’ rights, is a go-to-prison crime.

By resigning, Tim may not avoid the hard questions about caging - or the hard time that might result. When I passed the first set of documents to Conyers (a real film noir moment, in a New York hotel room near midnight), the soft-spoken Congressman said that, resignation or not, “We aren’t done with Mr. Griffin yet…”

Back in Little Rock, when asked about caging, Rove’s guy linked a few fibs to a few whoppers to some malefactious mendacity. That is, he lied.

At the risk of making you cry again, Tim, may I point you to an email dated August 26, 2004. It says, “Subject: Re: Caging.” And it says, “From: Tim Griffin - Research/Communications” with the email tgriffin@rnchq.org. RNCHQ is the Republican National Committee Headquarters, is it not, Mr. Griffin? Now do you remember caging mail?

If that doesn’t ring a bell, please note that at the bottom is this: “ATTACHMENT: Caging-1.xls”. And that attachment was a list of voters.

Greg Palast's investigative reports appear in Rolling Stone, the Guardian and on BBC Television. His latest film, The Best Democracy Money Can Buy, on how Donald Trump stole the 2016 election, is available on Amazon. Palast is Patron of the Trinity (more...)
Related Topic(s): 2004 Election; Election Reform; Election Theft; Media Distortion; Media Mainstream MSM; Progressive Problems; Propaganda GOP Rove, Add Tags
Add to My Group(s)
Go To Commenting
The views expressed herein are the sole responsibility of the author and do not necessarily reflect those of this website or its editors.