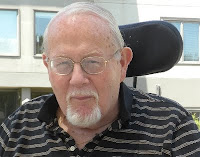 (Image by Unknown Owner)   Details   DMCA
2, 2005 Dad had a severe brain stem stroke. The next five years, three months and two weeks changed our family. Dad changed physically as a byproduct of the stroke but kept his cognition resulting in years of continued relationships. Mom changed from partner to caretaker. My brother and sister-in-law became frequent visitors, providing care and support for Dad and Mom a bit of a break. I took over their day-to-day financial life, dealt with insurance and details. My sister would read to Dad for hours on the phone, becoming his living conduit to literature. Change can be good, it can be bad"but as this experience showed us, it is constant.
During the five and a quarter years that we all lived with Dad's stroke I became too familiar with the medical care system, and Romney-Care in specific. In my blog post I examined the pros and cons of the health insurance sstem. I was conflicted as to whether an all private system would work better than an all public system, though I was sure that the mash-up that existed (and still exists) wasn't effective.
Considering major policy issues and their complexity and potentially changing one's views can be looked at as enlightened and mature on the one hand and as a rash flip-flopper on the other. The nuance of the issue and what the change is should determine which category it falls into. In this particular case I have always believed that Americans are entitled to access to health care -- my evolution (which is ongoing) is whether it is funded by the market or a single payer system. My own change is in tactic and approach -- not in the fundamental belief. I'm also a blogger/commentator and not an elected leader so there's a whole lot less consequence in my evolutions that real politicians.
Politicians are looked to for their adherence to the promises, goals and ideals that they set forth before the electorate. There are many examples of major shifts by recent Presidents.
President George Bush (41) famously promised in his 1988 acceptance speech of the Republican nomination for President: "Read my lips: no new taxes." By 1990 the pledge was reneged, infuriating millions who took the President at his word.
President Ronald Reagan rode into office in 1980 calling the Soviet Union an Evil Empire. For most of his Presidency Reagan increased defense spending and ratcheted up the rhetoric. By 1987 Reagan met with Soviet leader Mikhail Gorbachev and negotiated one of many treaties. He left office having stayed true to his fundamental principles of anti-Communism while changing tactics to set the stage for the end of the Cold War.
Bill Clinton won the Presidency in 1992 thanks to a coalition of groups, including the LGBT community. President Clinton's legacy is Don't Ask Don't Tell (related blog) and  the Defense of Marriage Act. President Clinton went from being the best hope of many gays and lesbians to the most anti-gay legislative President in history.
President Bush (43) campaigned and was elected with the doctrine of free market capitalism and a protectionist foreign policy. Eight years later he left office supporting the largest bailouts of American industry and having started two military conflicts designed to build nations. His book "Decision Points" identifies 9/11 as the cause for the shifts.
Barack Obama inspired the nation with soaring rhetoric, charisma and conviction that the rule of law would be the primary goal of his administration and the defining trait of Americans. He condemned Guantanamo Bay not just for what it is, but also for the idea that it represented: that people could be held without charges indefinitely. He believed it was fundamentally un-American. His background as a lawyer and Constitutional Professor underscored his commitment. As President Obama has done an about face -- continuing many of the programs and policies he criticized -- he takes action in contradiction. The recent assassination of Osama bin Laden is the most stark example where the rule of law was set aside. (related blog)
We change our minds. We change our tactics and approaches. We can even change perspectives. When we change our beliefs -- the core values that define us -- that's when notice should be taken. Bush 41's policy reversal infuriated people and he lost reelection because he couldn't convince the public why deficits mattered. 20 years later DADT is in the process of being dismantled and Bill Clinton endorsed gay marriage in New York, easing the anger against his abdication of human rights.  Less rigor was given to Reagan's change on the Soviets because his underlying goal of dismantling Communism worked -- he just changed the approach. Bush 43's switch from capitalism to a form of socialism and from protectionist to nation builder disenfranchised many, though he used 9/11 in a compelling way to explain the contradiction. There is virtually no discussion in these early post-bin Laden days to Obama's transformation.
Change is inevitable, it's a part of life and adapting to changing circumstances, information and environment is vital to good leadership. Inflexibility and being resolute in the face of contrary information isn't the solution, though the "Tea Party" movement is a byproduct of decades of leaders who don't adhere to their beliefs. There is a difference between adapting to data and a wholesale repudiation of the ideals that make up an individual's character. The Clinton, Bush 43 and Obama actions prove character is not based on a set of core principals.
President Obama's action is particularly disturbing. He was feverishly articulate, passionate and clear-eyed about his vision of a country that ruled by law. Today he is equally resolute that there was no other choice but to kill rather than capture bin Laden. There's no acknowledgement and certainly no explanation for the wholesale reversal of character on fundamental principles of life/death and the rule of law.
There's always the possibility my thinking will change.

Craig Coogan is a strategist, entrepreneur and commentator who examines issues with his unique perspective.
Related Topic(s): Belief; CHARACTER; Change; Change Dot Gov; Dadt; Leader; Legacy; Other; People; Politicians; (more...) Presidency; Rhetoric; Transformation, Add Tags  (less...)
Add to My Group(s)
Go To Commenting
The views expressed herein are the sole responsibility of the author and do not necessarily reflect those of this website or its editors.