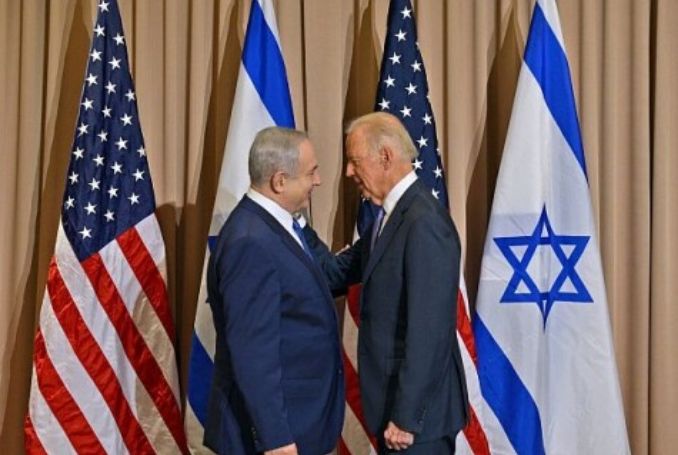 "I am a Zionist. You don't have to be a Jew to be a Zionist," current Democratic Presidential candidate, Joe Biden, said in April 2007, soon before he was chosen to be Barack Obama's running mate in the 2008 elections.

Biden is, of course, correct, because Zionism is a political movement that is rooted in 20th-century nationalism and fascism. Its use of religious dogmas is prompted by political expediency, not spirituality or faith.

Unlike US President, Donald Trump, or Bernie Sanders, Biden's only serious opponent in the Democratic primaries, Biden's stand on Israel is rarely examined.

Trump has made his support for Israel the cornerstone of his foreign policy agenda since his inauguration into the White House in January 2017. The American President has basically transformed into Israel's political genie, granting Tel Aviv all of its wishes in complete defiance of international law.

Sanders, on the other hand, came to represent the antithesis of Trump's blind and reckless support for Israel. Himself Jewish, Sanders has promised to restore to the Palestinian people their rights and dignity, and to play a more even-handed role, thus ending decades of US unconditional support and bias in favor of Israel.

But where does Biden factor into all of this?

Below is a brief examination of Biden's record on Palestine and Israel in recent years, with the hope that it gives the reader a glimpse of a man that many Democrats feel is the rational alternative to the political imbalances and extremism of the Trump administration.

August 1984: Palestinians and Arabs are to Blame

Biden's pro-Israel legacy began much earlier than his stint as a vice-President or presidential candidate.

When Biden was only a Senator from Delaware, he spoke at the 1984 annual conference of "Herut Zionists of America." Herut is the forerunner of Israel's right-wing Likud party.

In his speech before the jubilant right-wing pro-Israel Zionist crowd, Biden derided the Palestine Liberation Organization (PLO) and Arab governments, for supposedly derailing peace in the Middle East.

Biden spoke of "three myths (that) propel U.S. policy in the Middle East" which, according to the American Senator, are, "the belief that Saudi Arabia can be a broker for peace, the belief that King Hussein (of Jordan) is ready to negotiate peace, and the belief that the Palestine Liberation Organization can deliver a consensus for peace."

Time only cemented Biden's pro-Israel's convictions, leading to his declaration in April 2007 that he is not a mere supporter of Israel as has become the standard among US politicians, but is a Zionist himself.

Related Topic(s): Israel; Israeli Pressure On US; Jerusalem; Joe Biden; Love; Pro-israel; Zionists, Add Tags
Add to My Group(s)
Go To Commenting
The views expressed herein are the sole responsibility of the author and do not necessarily reflect those of this website or its editors.