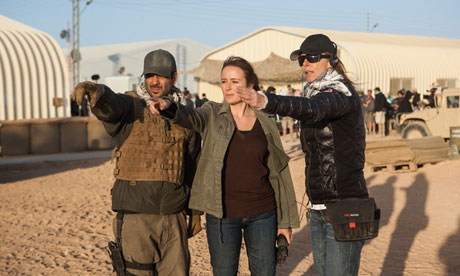 Just a few months ago, the consensus of the establishment press and the nation's (shockingly large) community of film critics was that Zero Dark Thirty was the best film of the year and the clear (and well-deserved) front-runner to win the most significant Academy Awards. "OK, folks, you can plan something else for Oscar Night 2013 ... Zero Dark Thirty will win Best Picture and Best Director (Kathryn Bigelow),"pronounced Time Magazine's Richard Corliss. "'Zero Dark Thirty' and Kathryn Bigelow won major critics' prizes on Sunday, confirming the Osama bin Laden manhunt thriller as an Oscar frontrunner," said Entertainment Weekly. The film "looks like the movie to beat right now" as the critics' awards "landscape is dominated by Kathryn Bigelow's 'Zero Dark Thirty,'" reported the Washington Post's Jen Chaney.

But then political writers had begun to notice what film critics either failed to detect or just wilfully ignored. The film falsely depicted torture as instrumental in the finding of Osama bin Laden ("what is so unsettling about 'Zero Dark Thirty' is not that it tells this difficult history but, rather, that it distorts it," said the New Yorker's Jane Mayer). Beyond the torture falsehoods, it was a blatant vehicle for CIA propaganda, bolstering a worldview exclusively out of Langley ("This is not a coincidence. The CIA played a key role in shaping the film's narrative," reported BuzzFeed's Michael Hastings; the CIA "couldn't have asked for better product placement," said the New York Times' Timothy Egan; as a result, said The Atlantic's Peter Maass: "Zero Dark Thirty represents a new genre of embedded filmmaking that is the problematic offspring of the worrisome endeavor known as embedded journalism"). In sum, said MSNBC's Chris Hayes, the film "colludes with evil" (a long but very partial list of writers, filmmakers, FBI agents and even government officials who similarly denounced the film is here).

Related Topic(s): Argo; Awards; CIA; Film Reviews; Zero Dark Thirty - Movie, Add Tags
Add to My Group(s)
Go To Commenting
The views expressed herein are the sole responsibility of the author and do not necessarily reflect those of this website or its editors.