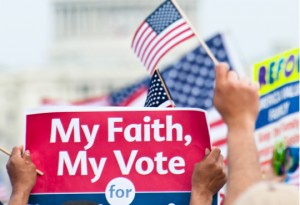 According to a recent Pew research study, the "young nones" are shaping the political future of this country.  These are the young adults who claim no affiliation with an organized religion:

"Here is a bit of good news for liberals still sunk in despair after last week's debate. The outcome of the 2012 election may have just become excruciatingly uncertain, but we now have yet more evidence that in the long term, not even God can save the American right.

"Of course, we already knew that demographic trends bode ill for the GOP. The party is hugely dependent on white voters, who make up an ever-declining share of the electorate. But it also relies on religious voters at a time when, according to a fascinating new report from the Pew Forum on Religion & Public Life, the number of religiously unaffiliated Americans has reached an all-time high.

"Perhaps the most important finding in the report, 'Nones' on the Rise,' is that, for the first time, there are now as many Americans who claim no religion as there are white evangelicals, the backbone of the GOP. Both groups make up about a fifth of the population, and the number of Americans without religion is on track to surpass the born-again population. About a third of adults under 30 don't associate themselves with any faith, compared with only 9 percent of those over 65. This is not, the report suggests, simply a result of a general youthful tendency toward apostasy. '[Y]oung adults today are much more likely to be unaffiliated than previous generations were at a similar stage in their lives,' it says.

"Politically, this is a big deal, because the religiously unaffiliated are as reliably Democratic as white evangelicals are Republican. In 2004 John Kerry won 63 percent of the 'no religion' vote, while four years later Barack Obama won 75 percent. '[T]here are roughly twice as many self-described liberals (38%) as conservatives (20%) among the religiously unaffiliated,' the report says. 'Among voters overall, this balance is reversed.' Ever since Ronald Reagan came to power in 1980, conservative born-again Christians have had an outsized effect on our politics. We are approaching a point where the nonreligious could be equally influential.

"That's not to say that all of those who reject religious labels are strict rationalists. The report uses the clunky term 'religiously unaffiliated' in order to cover the diversity of views among the cohort it's describing. Only 29 percent of them say they're atheist or agnostic; the rest describe their religion as 'nothing in particular.' Most say that religion isn't particularly important in their lives, but they're likely to believe in God, and many describe themselves as 'spiritual.'

"Still, these are largely secular people, not people who've abandoned Christianity for Eastern mysticism or new-age magic. '[T]he unaffiliated are about as likely as Christians to believe in reincarnation, astrology, or the evil eye,' the report says. There are exceptions -- 30 percent of the unaffiliated believe in '[s]piritual energy located in physical things such as mountains, trees, and crystals,' compared with 23 percent of Christians. But overall, this is a group that rejects supernaturalism.

"For 30 years, Republicans have deployed an aggressive, bombastic piety to their advantage. Now a changing population is turning the party's social conservatism into a burden.

"The growth of this bloc puts Republicans in a bind. Some theorists believe young people are rejecting religious labels precisely they've become intertwined with reactionary social policies. The report quotes Robert D. Putnam and David E. Campbell's book American Grace: How Religion Divides and Unites Us, which argued that as the religious right gained power, young Americans 'came to view religion ... as judgmental, homophobic, hypocritical, and too political.' And yet, as more secular Americans turn away from the GOP because of its association with the religious right, voters from the religious right will make up a greater and greater share of the party, pushing it to further alienate secularists.

"It's the same dynamic that's happening with white voters. Republican Party leaders understand that, eventually, they'll have to reach out to Hispanic voters to survive. But as long as white voters anxious about their declining numbers and cultural influence dominate the GOP, it can't moderate its positions on issues like immigration without risking a revolt from within.

"So too with the culture wars. For 30 years, Republicans have deployed an aggressive, bombastic piety to their advantage. Now a changing population is turning the party's social conservatism into a burden it can't shake. You don't have to believe in God to see the cosmic justice in that."

There may be hope for this nation yet.

Kathy never expected a career in radio as a talk show producer. Born and raised in Atlanta, Georgia, Kathy was completing her nursing degree when in 2001 - in an emergency - she was asked to fill in as the producer of Mike's program. Within a few (more...)
Related Topic(s): Hispanic; Ideology Moderate; Issues; Non-partisan; Politics, Add Tags
Add to My Group(s)
Go To Commenting
The views expressed herein are the sole responsibility of the author and do not necessarily reflect those of this website or its editors.