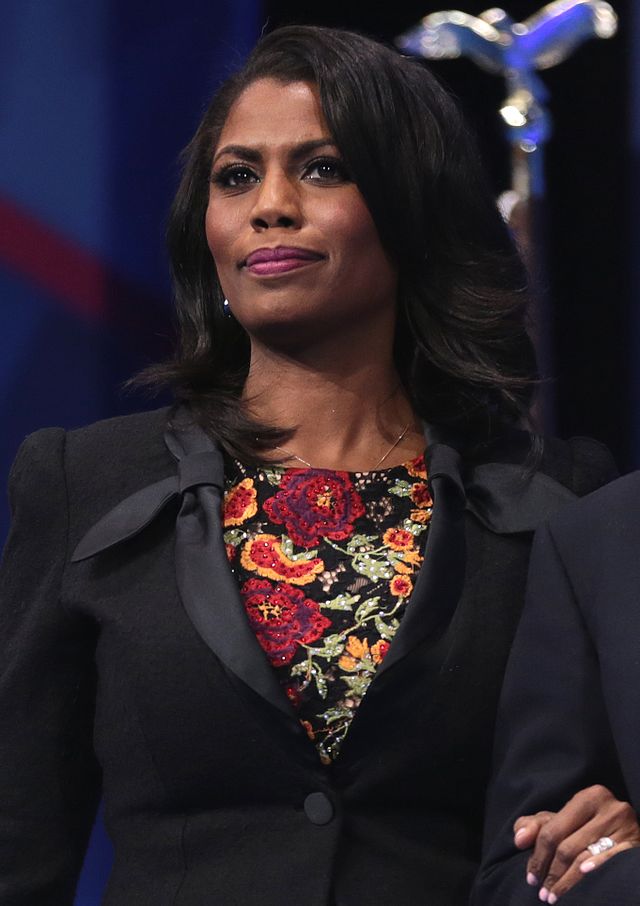 Omarosa Manigault Newman's greatest public service is her damning revelations of Trump's stunningly naked bigotry that comes from someone who sat by his side for years. The revelations come rapid fire in Unhinged: An Insider's Account of the Trump White House. His contempt for the Congressional Black Caucus, his torpedo of Harriet Tubman on the twenty-dollar bill, his hatred of Obama, his shamelessly using black ministers and black college presidents, his disgusting political manipulation of the birther issue, the unabashed racism of his staff and Chief of Staff John Kelly, and much more. Her revelations harshly warn that Trump is more than just a narcissistic, politically self-serving race baiter. He is hell bent on dangerously injecting a hard-edged climate of racial polarization and racial violence into the daily life of the nation. Here is the proof of his menace:

*Trump's visit to a black church during the 2016 presidential campaign:

"This is the longest I've been at a church in my life God how much longer do I have to sit here? After the minister placed a prayer shawl around him Donald thanked him but as soon as we got away he said, "take this thing off me!"

I was struck by two things about Omarosa when she discussed education issues with me on my weekly Los Angeles radio show, The Hutchinson Report, in 2014. Then she was one of several candidates for a vacant seat on the Los Angeles Board of Education. I had invited her and the other candidates to guest on the show to tell how they'd tackle the daunting educational problems facing minority students. I was impressed that she had done her homework and spelled out several concrete initiatives she would fight for if she was elected.

"At one point I asked him, "Why are you advancing this birther foolishness? He said, 'It's just politics. This is politics'."

The other thing I noted about her was that she was far from the shallow, self-serving, all glitter and glamour, reality star that others put her down as. She seemed to really care about the educational welfare of minority students. With a little more digging, I found that she did have a grounding in politics and public service working in a spot in the Al Gore campaign and the Clinton administration. At times, she had actively engaged with community and civil rights groups.

*Trump on the Congressional Black Caucus

"Why do you keep trying to work with those people? They clearly hate me."

"Almost surprised and caught off guard by how upset I was about his attacks on Lewis, Donald simply said, 'Well, he started it'."

Omarosa's shameless, aid and abet of one of the vilest, most corrupt, inept, and above all, stunningly racially provocative presidents and administrations in decades is something she'll have to answer for. She's already paid a steep price for it in the merciless barrage of name calling, trashing, and hectoring she gets from legions of African-Americans, civil rights and women's groups.

"For this particular speech, I begged him not to refer to the participants (African-Americans) as 'you people.' He looked puzzled."

In her book, she does acknowledge that her motive in endorsing Trump, taking a spot in his administration, and sticking with him for more than a year was in hindsight a horrible mistake.

Earl Ofari Hutchinson is a nationally acclaimed author and political analyst. He has authored ten books; his articles are published in newspapers and magazines nationally in the United States. Three of his books have been published in other (more...)
Related Topic(s): Donald Trump Campaign; Donald Trump Lies; Omarosa Manigault-newman; Omarosa Manigualt, Add Tags
Add to My Group(s)
Go To Commenting
The views expressed herein are the sole responsibility of the author and do not necessarily reflect those of this website or its editors.