Click Here to Remove All Ads
My guest today is Elaine S. Reisman. An early childhood educator for many years, she has been quite active since her retirement. Welcome to OpEdNews, Elaine. You have become very involved with BOLLI , [formerly BALI] the adult education program at Brandeis University. Can you tell our readers how that came about? 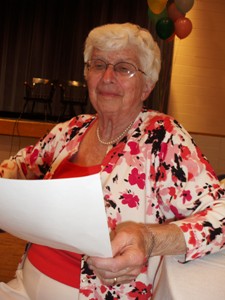 Anticipating retirement forced me to think: now, what will I do? Since graduating from college, my primary role was wife and mother until our four children were in school. Then I started working part time and being active in the community. The last eighteen years of my professional work was at Lesley College (now University) in Cambridge, MA. Meeting the needs of young adults with specific learning disabilities at Threshold, a program designed for individuals who 'fall in the cracks' (neither retarded nor college material) began to try my patience. I felt that I was not the teacher that I wanted to be and that it was time to leave. My roles had now increased as I was also coping as a caregiver for my husband, Bernie. Symptoms of Alzheimer's Disease had been evident for several years by then and the ravishes of his dementia are most stressful.

Bernie retired in 1999 and spent the next year developing BALI (Brandeis Adult Learning Program). He had the vision and ability to shape an academic program for senior citizens with an aim of incorporating the social aspects of a community. Assistance with the development of the program made it viable in spite of the dementia. It now has become a most successful program, meaningful intellectually and socially for many people.

How grateful I am to Bernie for this legacy. After several years as a participant, I started to offer classes as a Study Group Leader. Using my skills as an educator and exploring areas of interest in which I have minimal knowledge has been a life line for me as I now cope with the sadness of the severe stage of his illness.

It must be incredibly sad and stressful for you, despite your very full life otherwise. Talk about how your first venture in teaching adult classes, please, Elaine.

With the opportunity to participate in such a program, I was able to expand my horizons by taking courses in subjects to which I felt I had had minimal exposure: certain areas of history and literature, political subjects. Having enjoyed acting in plays in college and reading plays with other couples, I took a course in drama. Unfortunately, it was not satisfactory and I decided I would risk designing my own course. So, now, having offered 15 semesters of courses [five courses, each given three times] related to drama, I continue to savour the "treasure hunt".

That means that I seek plays that are generally less familiar. The first course I offered was called "Timeless Issues in Drama" and included reading plays I remembered from college days which still had relevance to current issues. Issues included: machines taking over work that man used to do; introduction of robots; people behaving like animals and following the herd; issues of good and evil; anti-war sentiments. I then went on to organize courses around a particular issue: Money, Justice, Greed and, for a change of pace, A Time to Laugh, in which the hierarchy of comedy was examined.

Since I am not an expert on any of the subjects nor on drama, it fit my facilitating style to be up front about that fact. Thus, the learning environment is one in which the participants are expected to work as a team with me as we explore the content of the plays, the format, information about the playwrights and the period of time in which the play was written. Participants volunteer to report on these aspects as well as to act in selected scenes from the plays.

For me, the atmosphere in the classroom is electric! Discussions are spirited and informed. Even those who had not volunteered to prepare a report, come in with information and/or ideas to share. Rewarded by 100% participation, I am spurred on to do even more exploration myself.

Perhaps most important is that this involvement is consuming and keeps me thinking about positive aspects of my life rather than the sadness I feel about Bernie's dementia.

It sounds fabulous. I wish I lived in the area so I could take your class. What kind of feedback have you gotten over the years?


Response to these classes have been so rewarding! Involving others in the learning process is my goal. I see myself as a facilitator of learning. Early childhood education was my focus for many years. With young children, I set the stage by structuring the environment and encouraging the children to act upon it. Use of their five senses and confidence in what they themselves could do with their bodies and minds encouraged them to have confidence. Social skills were a large part of the curriculum. They were not dependent on me as the 'teacher'. Tools of learning that they could carry through life was the goal.

This philosophy of education was part of my training at Antioch College in Yellow Springs, Ohio, where I received in BA Education. At that time, early education was considered glorified baby sitting. Since then, there has been greater understanding of the importance of the early years in laying the foundation for future development.

So, how does this apply to offering courses to older adults? The same philosophy works. I structure the courses so that participants have maximum opportunities for input. We are learning together. A community exists because we are listening and responding to each other. I am not the expert. Obviously, I do a lot of background work in order to structure this and do assume the role of framing and clarifying the discussion. However, class members also do this.

Responses to the course include: "I never thought I could act"; "New ways of thinking have been opened up to me"; "I am having fun learning"; "My family got intrigued and read some of the plays"; "We have discussions at home about the topics". What greater reward could I have than that they are enjoying?

I heard that your classes are so popular now that there's a lottery to decide who gets in. Is that true? What's the optimal number of students and how did you determine that?

Yes, my classes are lotteried. It is flattering! Some people have taken all five of the courses that I have offered. Because I feel that it is important to include everyone who wants to enter the discussion, I have asked for no more than 20 in a class, but have had 25. Decision for who gets involves a system designed by the program. If there are too many wanting the same course, there is a lottery. Some members have taken all five of the courses I offer.

Related Topic(s): Alzheimers; Boston; College; Drama; Elderly-Seniors; Interviews; Retirement; Retirement-Seniors-Elders; Seniors; Teaching, Add Tags
Add to My Group(s)
Go To Commenting
The views expressed herein are the sole responsibility of the author and do not necessarily reflect those of this website or its editors.