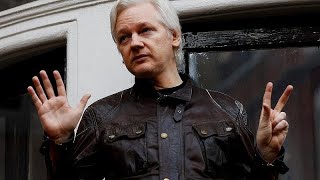 The date April 11, 2019, will live in infamy in the annals of Western "values" and "freedom of expression." The image is stark. A handcuffed journalist and publisher dragged out by force from the inside of an embassy, clutching a Gore Vidal book on the History of the US National Security State.

The mechanism is brutal. WikiLeaks co-founder Julian Assange was arrested because the United States demanded this from the Tory British government, which for its part meekly claimed it did not pressure Ecuador to revoke Assange's asylum.

The US magically erases Ecuador's financial troubles, ordering the IMF to release a providential $4.2-billion loan. Immediately after, Ecuadorian diplomats "invite" the London Metropolitan Police to come inside their embassy to arrest their long-term guest.

Let's cut to the chase. Julian Assange is not a US citizen, he's an Australian. WikiLeaks is not a US-based media organization. If the US government gets Assange extradited, prosecuted and incarcerated, it will legitimize its right to go after anyone, anyhow, anywhere, anytime.

Call it The Killing of Journalism.

The case by the US Department of Justice (DoJ) against Assange is flimsy at best. Everything has to do essentially with the release of classified info in 2010 -- 90,000 military files on Afghanistan, 400,000 files on Iraq and 250,000 diplomatic cables spanning most of the planet.

There's no other way to interpret that. This amounts, no holds barred, to all-out criminalization of journalistic practice.

For the moment, Assange is charged with "conspiracy to commit computer intrusion." The indictment argues that Assange helped Manning to crack a password stored on Pentagon computers linked to the Secret Internet Protocol Network (SIPRNet).

In March 2010 chat logs obtained by the US government, Manning talks to someone alternatively named "Ox" and "press association." The DoJ is convinced this interlocutor is Assange. But they must conclusively prove it.

Manning and this person, allegedly Assange, engaged in "discussions." "During an exchange, Manning told Assange that 'after this upload, that's all I really have got left.' To which Assange replied: 'Curious eyes never run dry in my experience.'"

Related Topic(s): Assange; Journalism; Manning; Right Wing Hate; Rights Denied; Wikileaks, Add Tags
Add to My Group(s)
Go To Commenting
The views expressed herein are the sole responsibility of the author and do not necessarily reflect those of this website or its editors.