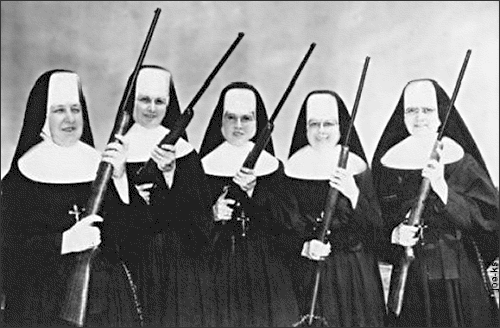 You can't shout "fire" in a crowded theater. Unless you yell "aim" first.

Okay, you can't falsely shout fire in a crowded theater, but the point remains that there are limits to our constitutional rights. Or at least most people think there should be. Just don't tell the National Rifle Association.

After lobbying by the NRA, some states, including Ohio , have legalized carrying concealed weapons in bars. Setting aside the absurd constitutional issue of an inviolable right to publicly bear arms while drunk, who thinks this is a good idea? The same people who think the answer to the problem of guns in school is more guns in school.

Justice Scalia -- an NRA stooge -- interprets the Second Amendment so bizarrely, he thinks it arguably protects any arms that you can carry. Grenades, rocket launchers, bazookas, Ted Nugent. Who knows?

To be fair, most of these weapons wouldn't allow a person to kill any more people than high powered assault rifles with high-magazine clips (with the possible exception of Ted Nugent, whose anger is measured in megatons). Still, to assume or imply that you have a right to bear these dangerous weapons is to betray your unfitness to do so!

It's a good thing that we don't have tactical, hand-held nuclear weapons. By Scalia's own logic, if they existed, we'd arguably have a right to bear them. Ahh, concealed tactical nukes in bars. The NRA can only hope.

Brett Cottrell studied political theory at Boise State and graduated from The George Washington University Law School. Academic wanderings aside, he's a native of Las Vegas, born and bred in Sin City. This explains a lot. He is the author of The (more...)
Related Topic(s): Firearms; First Amendment; NRA; People; Rocket; Weapons, Add Tags
Add to My Group(s)
Go To Commenting
The views expressed herein are the sole responsibility of the author and do not necessarily reflect those of this website or its editors.

You can shout FIRE in a theater, if you shout AIM first.

Scalia Speaks. The World is Worse for it.