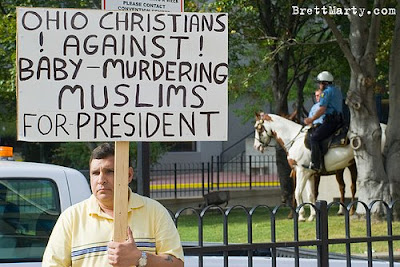 A number of people consistently have been giving explanations of religion and defending misunderstandings of religion. Possibily thousands have written about the reality that religion can be practiced in "moderation" and not all religious people are extremists.

Recent discussions indicate individuals find an utmost value in defending one's religion, promoting religion, and ensuring all Americans can practice religion so long as that religion does not cut into their religion's ability to live free and prosper. Yet, what do they say to the idea that's why the world sees people like Terry Jones who are driven to organize days of actions where Korans are burned, like Rabbi Ovadia Yosef, who suggest "all nasty people who hate Israel" should be struck down "with the plague," or like members of the Muslim Brotherhood, who will always assert (although they might have justification) peace talks will not favor Palestinians and should be resisted.

Religious people like Jones, Rabbi Yosef, and those in the Muslim Brotherhood fear another religion could eat into the world their religion occupies. They're why the idea of coexistence of religions is naïve. Believing in another religion essentially means you do not believe in another religion. And, implicit in belief, whether you interpret the language of your religion's text literally, is the idea that other religions--nonbelievers--are to be destroyed. To a certain extent, Glenn Beck, James Dobson, Newt Gingrich, Franklin Graham, Sarah Palin, Rand Paul, Tony Perkins, and many employed by Fox News entertain this implicit belief.

Also, if one wishes to be objective, those who point out passages in the Koran and argue Muslims are committed to Sharia are right. It's true that, theoretically, in order to be a true Muslim or true believer you have to follow all aspects of the Koran or the religion. But, couldn't we say that for any religion?

Kevin Gosztola is managing editor of Shadowproof Press. He also produces and co-hosts the weekly podcast, "Unauthorized Disclosure." He was an editor for OpEdNews.com
Related Topic(s): Belief; Christianity; Faith; Fear; George W Bush; God; Ideas - Philosophy; Islam; Jesus; Obama; (more...) Patriotism; Poverty; Sharia, Add Tags  (less...)
Add to My Group(s)
Go To Commenting
The views expressed herein are the sole responsibility of the author and do not necessarily reflect those of this website or its editors.