"We have met the enemy and they are ours."

- Admiral Oliver Hazard Perry, after which the town of Hazard, KY is named. 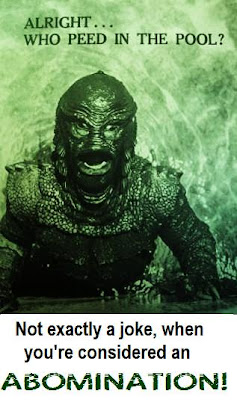 I remember when, back in the fifties, African Americans were not allowed in some public swimming pools. The reason: it was alleged that they defecated and urinated while in the water. True. People thought that back then. Of course, that was then and this now.

Activists in Kentucky  are planning a peaceful response after two gay men with developmental and intellectual disabilities were kicked out of a public pool.

A maintenance technician reportedly cited the Bible while telling the two men they couldn't swim at The Pavilion, a government-funded recreational facility in Hazard, Kentucky.

"We own this place and can tell you to leave if we want to," the couple was told, according to the Kentucky Equality Foundation.

"We own this place" was perhaps the more egregious statement, the "we" presumably being the good Bible-believers of Hazard, KY. The Bible was also cited when the men and their attendant staff were forced to leave the premises.

Deja vu - it can strike in the strangest places, so I found myself thinking back to the fifties, thinking about African Americans being treated the same way. And treatment is really what civil rights are all about: thinking in bigoted terms is not the same as acting out your bigotry because it is when you act on your prejudices and fears that people are truly hurt. The Christian Right (especially the African American part) is insulted when gay rights and civil rights are equated.

The situation here, however, vividly conveys the parallel: whether you think someone is uncivilized or unbiblical, the results of discrimination are the same: hurt and a tragic feeling of alienation.

For a town whose claim to fame is the Mother Goose House, you would think that a Fairy Tale theme would be predominant, but the demographics of Hazard, KY are more Brer Rabbit than Cinderella: 90% white, 7% African American and, well the other 3% - who cares? And it's set in a land where snake handlers still have churches and where the Dukes of Hazzard would look very comfortable (and yes, there is a connection*).

Although there has been a steady decline in Hazard's population since the 1950s, there have been numerous commercial and residential developments within the city. The city is also actively working on a downtown renaissance plan to rejuvenate its business district.

Of course, that was before "teh gays" started to make trouble.

My clients, whom already feel ridiculed and different, left the city owned facility crying and embarrassed for trying to participate in 'normal' activities that everyday 'normal' people do."

But they aren't normal, at least that was the point being made by the maintenance technician who told the two men to both go home "and read their Bibles": they aren't normal - in the eyes of God, that is. And according to the Mayor of Hazard, no PDA is allowed ever at the Pavilion:

Hazard Mayor Nan Gorman said it is her understanding that people are asked to leave fairly often due to the rule barring excessive public displays of affection, no matter their sexual orientation. She said the Pavilion should have a family atmosphere and displays of affections, whether they be from heterosexual couples or otherwise, shouldn't take place there.

"People have little children up there, it's a family [facility]," she said. "People don't want to see it."

Evidently, Hazard, KY is not the most romantically inclined place on earth. Now an investigation is underway in order to stave off any protest and unwanted publicity for the town. Up to 40 witnesses will be interviewed as to the extremity of hugging and kissing that went on between the two men.

Rev. Dan Vojir is has been writing/blogging on religion and politics for the better part of ten years. A former radio talk show host (Strictly Books " Talk America Radio Network) and book publisher, Dan has connected with some of the most (more...)
Related Topic(s): Christian Right; Christian Values; Civil Rights; Disabled; Gay Rights; Hazard; Kentucky; Public Money; Public Policy, Add Tags
Add to My Group(s)
Go To Commenting
The views expressed herein are the sole responsibility of the author and do not necessarily reflect those of this website or its editors.