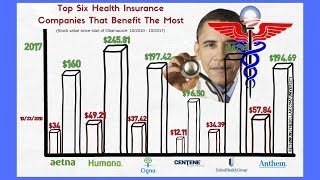 From youtube.com: Here is a quick glance at the top health insurance providers that have benefited the most since the Affordable Care Act legislation was started in October of 2010
(Image by YouTube, Channel: Rethinking The Dollar)   Details   DMCA

The discussion of health care has been badly warped ever since the debate over the Affordable Care Act (ACA) in 2009. A central feature of the ACA was the requirement that everyone get insurance, or pay a penalty if they don't. While many resented having the government force them to buy insurance, especially in a context where they had to buy it from a private insurance company (i.e., there was no public option), this was actually a central feature of the ACA.

The main point of the ACA was to make it possible for people with serious health issues to get coverage. Insurers are happy to cover healthy people. For the most part, covering a healthy person means insurers get a check every month for nothing. It's good work, if you can get it.

This is why the ACA came with a mandate for buying insurance. The point was to keep healthy people in the pool to ensure that health insurance would be affordable. Of course even without discrimination based on health, insurance would still be very expensive. This was the reason for the subsidies.

Unfortunately, the subsidies were not very generous and they phased out at levels that left many middle income families with very high insurance costs. Still, many more people had access to insurance than before the ACA.

Trump and the Republicans are determined to dismantle the ACA and bring us back to the pre-ACA world in which people with health issues either cannot get insurance or face extraordinarily high premiums. The key to getting to this spot is unraveling the insurance pools so that relatively healthy people do not have to share in the cost of paying for less healthy people.

While keeping the pools intact was always the key to making the ACA work, this fact was largely derailed over the extensive coverage given to the "Young Invincibles." The story here is that the premiums were modestly weighted so that younger people paid somewhat more than their average cost so that older people could pay somewhat less than their average cost.

This got highlighted as a case of the young subsidizing older pre-Medicare insurees. The argument was that if we didn't get enough young healthy people to sign up for ACA insurance the system would not be financially viable. In reality, the Young Invincibles story was nonsense. As any simple analysis showed, it made relatively little difference if fewer young people signed up for insurance, what mattered was whether there was a skewing based on health.

The subsidy that young people on average paid into the system was relatively modest, since their cost for insurance is on average just one third of the oldest pre-Medicare age group, people between the ages of 55 and 64. It is healthy people in this latter age group that pay the largest subsidy for insuring less healthy people.

While most people in their twenties and thirties can count on being in generally good health, a large share of the people in their late 50s and early 60s are also in good health. These relatively healthy people pay a much large sum towards supporting the less healthy than the "Young Invincibles."

To take my own case, I have been fortunate to have very good health. The largest chunk of my health care bill consists of my bi-annual check-up with my family practitioner and a flu shot when I remember to get it. Yet, the average cost of health care for people in my age group is over $9,000 a year. This is hugely more than insurers are paying to cover my actual health care expenses.

If people like me are given the option to pay less money for a plan that excludes coverage for many conditions, and includes a large deductible, it would be a very good deal for us. It also would quickly destroy the insurance pools and leave people with health issues unable to afford insurance.

Dr. Dean Baker is a macroeconomist and Co-Director of the Center for Economic and Policy Research in Washington, D.C. He previously worked as a senior economist at the Economic Policy Institute and an assistant professor at Bucknell University. (more...)
Related Topic(s): Health Care; Health Care Benefits; Health Care Costs; Republican Defection; Republican Healthcare, Add Tags
Add to My Group(s)
Go To Commenting
The views expressed herein are the sole responsibility of the author and do not necessarily reflect those of this website or its editors.