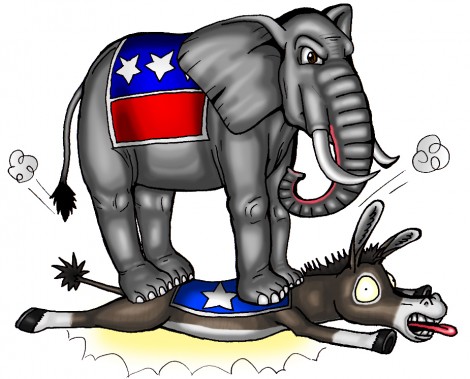 (Image by Unknown Owner)   Details   DMCA
Oh, the pain of it all.

A time existed when my professional life revolved around the Republican Party.

In 1981, I took a sabbatical from writing and shooting photos for newspapers to take a job as a press secretary for then Republican Congressman Paul Findley of Illinois. The plan was to work a couple of years inside government to learn how it worked and then return to newspapers with knowledge that would help me be a better journalist.

Two years turned into seven on Capitol Hill as I moved on from Findley to become chief of staff to another GOP Congressman and then a senior committee staff member for a third. I also took leaves of absences during election seasons to work for the 1984 Reagan-Bush Presidential re-election campaign and as a political operative for both the National Republican Congressional Committee and the National Republican Senatorial Committee.

Like too many people who go to Washington with one purpose, I was seduced by the world of politics, the money and the power. After seven years working on the Hill and in politics, I went on to serve another five years as Vice President of Political Programs for the National Association of Realtors, which at the time was the largest trade association in the country with the biggest political action committee.

Although I was often identified as a Republican -- and even served for a time on the visiting faculty of the GOP American Campaign Academy and the Washington Center for Politics and Journalism -- I never registered to vote as a Republican, never contributed money to any candidate or political cause and turned down several job offers at the White House and cabinet agencies because I knew I could never pass the political vetting process.

I worked for the Republicans because they paid well. I looked the other way when it came to the party's extreme positions.

Yet I cannot, and will not, ever consider my time as a GOP political operative a career highlight or something for which to be proud. What I learned about the political process in more than a dozen years serves me well as a journalist. It taught me that political corruption is not limited to a single political party and that no party or political organization puts America ahead of its own interests or selfish agendas.

While both Republicans and Democrats misuse the system for personal and political gain, the problem that turns the entire process into a nightmare is the system itself. The many, and often seemingly insurmountable problems that this nation faces cannot be traced solely back to one political party or the other.

Republicans stand for values that far too often ignore the wants and needs of the American people but so do Democrats. Both parties exist to serve moneyed special interests and have no time or need to consider or serve the vast majority of Americans who have neither the money or the connections to exert political influence over their elected -- and misnamed -- "public servants."

Replacing one set of political hacks with those from another party can never solve the problem because the problem itself is the very system that serves both sides and any changes to that system must come from those who are serve -- and owe their livelihood to -- the existing, failed and flawed system.

Needed and necessary change cannot come from within the system. The system itself must be changed and that change requires dedication, determination and conflict.

Can it happen? That answer is elusive. It needs to happen, but how remains a question in search of an answer that may scare the hell out of all of us.

Related Topic(s): Corruption; Democrats; Journalism; Republican Hypocrisy; Vice, Add Tags
Add to My Group(s)
Go To Commenting
The views expressed herein are the sole responsibility of the author and do not necessarily reflect those of this website or its editors.