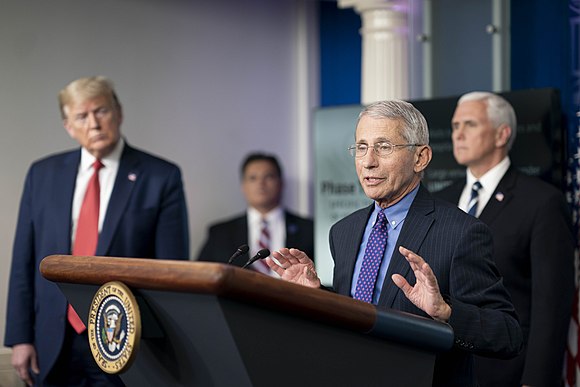 "When polls said only about half of all Americans would take a vaccine, I was saying herd immunity would take 70 to 75 percent," Dr. Anthony Fauci, director of the US National Institute of Allergy and Infectious Diseases and public face of the federal government's response to the COVID-19 pandemic, told the New York Times in December. "Then, when newer surveys said 60 percent or more would take it, I thought, 'I can nudge this up a bit,' so I went to 80, 85."

If you're startled by Fauci's admission that he lies to the public depending on what polls say, you shouldn't be. It's not the first time.

In March, he told CBS's 60 Minutes "there's no reason to be walking around with a mask." Months later, as mask mandates became the political establishment's preferred "we gotta order people to do things" measure, he claimed he'd previously been lying so that people wouldn't rush out and buy up masks needed by medical personnel.

In that case, he seems to have been lying ABOUT lying -- scientific evidence for the efficacy of masks in preventing viral transmission still looks inconclusive at best -- but the obvious motive was the same. Anthony Fauci, like most politicians and bureaucrats, is perfectly willing to lie to you if he thinks lying to you will get you to do as he demands.

In the Times interview, though, Fauci points his finger at a real problem, probably not realizing that that finger points right back in his direction: "We need to have some humility here. We really don't know what the real number is."

Nearly a year into the pandemic, there's still a lot we (including Dr. Fauci) don't know about it and about how to get through it. But instead of having some humility about that, Fauci alternates between two approaches:

Approach One: Feign certainty, and use that certainty as an excuse to order you around.

Approach Two: Admit uncertainty, and use that uncertainty as an excuse to order you around.

Fauci's far from alone in those approaches. Demands for authority, whatever the cost to those upon whom i's inflicted, are the sacraments of the Cult of the Omnipotent State.

The US Food and Drug Administration held up approval of Moderna's COVID-19 vaccine for seven months after Phase I trials had demonstrated that vaccine's basic safety. Their uncertainty (and, more importantly, their authority) trumped your health.

Months after killing thousands with his order that nursing homes full of vulnerable seniors accept COVID-19 patients, New York governor Andrew Cuomo is back, threatening million-dollar fines on hospitals that administer vaccines to people not on a government-approved list rather than throw away vaccine which will expire if it isn't used. What he lacks in competence, he tries to make up for with unshakable certainty of his right to run your life.

COVID-19 is certainly a terrible disease and has killed many Americans.

Fauci et al.'s cravings for authority and demands for obedience are likewise terrible diseases -- diseases which have undoubtedly increased the COVID-19 death toll.

Related Topic(s): Andrew Cuomo; Corona Virus Coronavirus Covid-19; Dr Anthony Fauci Infectious Disease Expert Nih; Pandemic, Add Tags
Add to My Group(s)
Go To Commenting
The views expressed herein are the sole responsibility of the author and do not necessarily reflect those of this website or its editors.