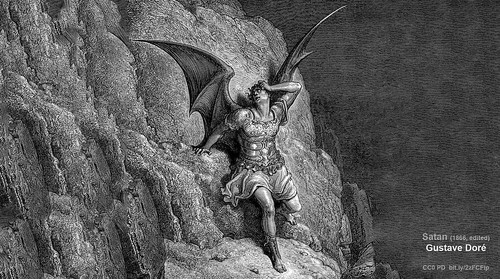 From the very dawn of early Christian teachings the central core of the religion is that Satan the Devil is responsible for all bad things. We're told -- over and over again -- that he's the Prince of Darkness, the Tempter and Liar, the very opposite of the goodness and purity of God's love and compassion. But, in many ways Satan is just like God -- he too works in mysterious ways. He uses his minions, called demons, to constantly lead humans down wrong pathways with the end-result and sole intention of winning souls in an endless program and project to collect that which is said to be "godlike" in humans.

Here in America a poll taken about five years ago found that about 60 percent of the population believes in a literal Devil. It was therefore no surprise that, of those polled; believing in Satan was most popular among those Americans who identified as Protestant, Catholic, or Christian. And 86 percent of Christians believed in Satan -- they said that he was real. Also not surprising is the fact that America's history is BOTH interwoven and intertwined with beliefs in God AND the Devil.

Consider the following: Way back in 1638, early American Puritans believed that "mysterious ways" meant that the Prince of Darkness was responsible for several "rebellious" Puritan women giving birth to stillborn monsters, babies. John Winthrop described the Devil in his diary as having "horns, hard and sharp," a "back full of sharp pricks and scales" and "on each foot three claws, like a young fowl." And to Jonathan Edwards, the man that many have called America's greatest theologian, Lucifer [Satan] was an almighty "counterfeit," one who could mimic even the "graces of the Spirit of God" with miraculous precision.

And the 1950s saw an almost fanatic love-hate relationship with Satan the Devil. Especially in America's "Bible Belt" and Deep South where fundamentalist, fire-and-brimstone preachers held sway, Satan was blamed for everything; his name whipped out as the culprit for every wrongdoing, natural disaster or unexplained natural phenomenon. Heck, right up to the present day, Christians spend more time railing against Satan and his deeds than really promoting the works of God. Fundamentalists Christians and literal biblical readers have rejected even natural laws of life and death blaming Satan for death and for dragging the innocent to Hell.

In the 1950s, as popularized by a large number of American preachers and evangelists, Satan became the mastermind of popular culture, especially music, dance and ANYTHING fun. Not only was the Great Tempter deceitful, dangerous, and hoping to help us reserve our spots in Hell, the Devil was also extraordinarily creative. From Elvis Presley to the Beatles and even Pat Boone, according to preacher after preacher, Satan was using most popular singers and musicians of the time to coax us into sexual promiscuity, alcoholism, recreational drug use, and dancing. Yes, dancing.

Still, like everything, perceptions of Satan (and God) have changed over the ages and with the times. Today, nobody wants to stone women to death accused of being witches and in league with the Devil or burn them at the stake for having black cats as a pets. To be sure Satan, to most Americans is still very real and active. However, today's Christians do seem to have a wide and varied understanding of who Satan is and what role he plays in people's lives. According to today's believers, Satan can be anything from an evil spirit who gets called up from hell by some acid rock band to one that lives in the hearts of some politician or international figure. Or Satan is the evil culprit engaged in putting America's feminists against men.

The fact is that America's culture turns to Satan for the language of evil because he's much more fun than real-world social problems. Rather than becoming preoccupied and weighted down by real life daily issues and challenges, most Christians would rather read about Lucifer in all his lurid majesty instead. Such modern day escapism is to be found in all religions where emphasis is placed on the after life because this world and its evils is the playground of Satan. For many rejecting Satan and all his sins is the sure fire way to get into Heaven. Battling the Evil One on a daily basis and developing the ability to "see the Devil and all his works" is what it means to be righteous and God-fearing.

Indeed, the adamant belief by many Christians that they have records of their daily encounters with Satan, is easy to find -- just visit any born again church this Sunday. So that said, is that the true allure of Satan the real reason that so many of America's Christians are seemingly in love with "seeing" and "encountering" Satan? The answer to his question may be found in the inescapable fact of the human need to prove our way of life. This might explain why so many Christians are a bit Satan-happy, seemingly ready to turn any event that we deem evil, frustrating, overwhelming, or contrary to our moral codes into credentials of the Prince of Darkness. For many Christians, finding the Devil in the details of our daily lives is to offer proof or justification to others and perhaps even themselves, that God and Jesus are real and thus bring greater weight and relevance to the practices of church and ministry.

So the big question is: do Christians need Satan? Can God and faith exist without demons and devils?

But for many Christians, whether they would admit it or not, Satan is as important to American Christianity as is God, Jesus, or the Holy Spirit. For example, is there any other group of people in America today more fascinated and intoxicated with Satan than those Christians who believe in Satan, fear Satan, proclaim Satan, speak for Satan, and bring Satan the most publicity?

Today, Satan is an easy go-to device for making villains out of people with whom we disagree. Satan is a name we drop when we are afraid of change. Satan is a big scary demon that we see when our logic fails to explain what's in front of us. Satan is an excuse we use when we aren't willing to face our own demons. The bottom line is that if there was no Satan human beings, as creatures of superstition, fear and insecurity, would have invented him. Or some bogeyman that we could blame and pin things on -- especially bad things -- when we cannot explain them. In less enlightened times even acts of nature were construed as evil and every culture has its Satan variable.

That has not changed much in these enlightened times.

Related Topic(s): Alcoholism; Christian Capitalism; Christian Values; Dawn; Music, Add Tags
Add to My Group(s)
Go To Commenting
The views expressed herein are the sole responsibility of the author and do not necessarily reflect those of this website or its editors.