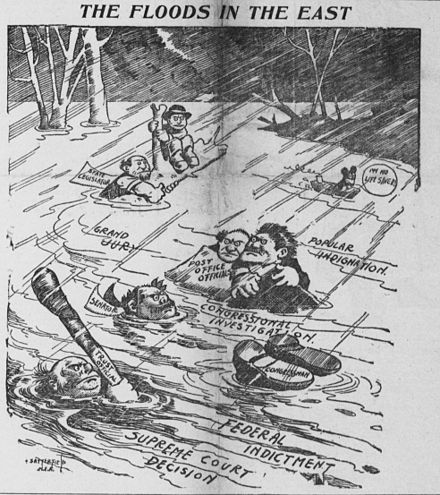 Did vice president Joe Biden threaten to withhold $1 billion in US loan guarantees from the Obama administration if the Ukrainian government failed to remove a prosecutor whose investigation targets included Burisma Holdings, a gas company on whose board Biden's son, Hunter, sat? Yes. He's publicly admitted it.

Let us briefly pause while partisan Democrats and partisan Republicans, supporters of Biden and supporters of Trump, get the screams of "false equivalency!" out of their systems.

OK, now let's get back to the real world where, as Lord Acton wrote, "power tends to corrupt; absolute power corrupts absolutely."

Or, as President Trump tweeted about his accusers, and has he's established concerning himself over the course of decades, "these people are stone cold crooked."

The basic facts of both sets of accusations are undisputed by the accused. What's at issue is their motives.

Those with power (including one of its forms, wealth) tend to act to preserve that power. As the amount of power requiring preservation increases, so does the temptation to use that power in corrupt ways to protect and expand it.

The positions of president and vice-president/potential president, entail considerable power. Suspecting corrupt motives on Biden's part, Trump's part, or both, is not only not beyond the pale, it's perfectly reasonable.

The emerging scandal may cost both Trump and Biden their 2021-2025 presidential ambitions. It could conceivably even cost Trump several months of his current term if the House impeaches and the Senate convicts (the former looks increasingly likely, the latter seemingly unlikely).

But the problem goes deeper than the ambitions or personal moral compasses of Donald Trump and Joe Biden. The problem is power itself. We've ceded far too much of it to politicians, and the executive branch in particular has co-opted far too much of what we've unwisely ceded to the state in general.

Neither Joe Biden nor Donald Trump should have ever had control over billions of dollars in aid to Ukraine's government in the first place. If the US does dispense foreign aid (it shouldn't), the job of the White House is to cut the checks as directed by Congress.

The US, after decades of creep toward dictatorship, is there. The executive branch has seized plenary power because Congress has failed to jealously guard its prerogatives and the Supreme Court has failed to zealously protect our rights.

The authoritarian dystopia into which we've fallen, not the specific details of a dictator's or would-be dictator's abuses, is the problem. If we don't solve it, we solve nothing.

Related Topic(s): Corruption; Joe Biden; Trump, Add Tags
Add to My Group(s)
Go To Commenting
The views expressed herein are the sole responsibility of the author and do not necessarily reflect those of this website or its editors.