While U.N. figures suggest that it would take 1% of U.S. military spending to provide the world with clean drinking water, the United States could end the worst cholera epidemic in recorded history (in Yemen) for far less than that and far less than what it is spending to create the epidemic through the U.S.-Saudi war on Yemen. And what may turn out to be the most widespread poisoning of water sources around the globe ever is the use of chemicals on U.S. military bases -- chemicals that are not needed, used on bases that are worse than not needed. 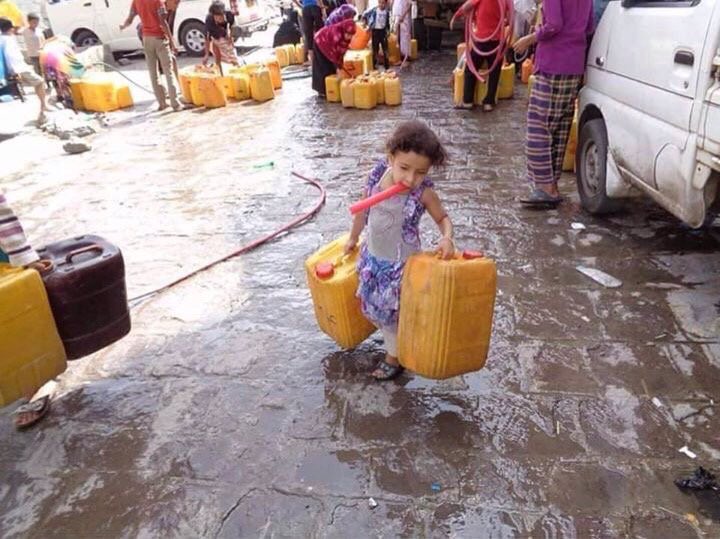 Many of us have been trying to halt senseless counterproductive mass-murder in Yemen since it was a "Constitutional scholar" president doing it with robotic airplanes. The legislation currently in play in Congress leaves a loophole you could fly a thousand drones through. But, as a step, it is well worth taking. Already having moved from 55 to 37 senators voting for endless, unquestioned, and undebated genocide was a step worth taking between last March and last week. When public pressure and Congress blocked Obama from a massive bombing campaign on Syria five years ago, that too was a step worth taking. But refusing to bring something to a vote because it would fail (as with Syria) doesn't have the same precedent-setting ring to it as passing legislation to end a crime long underway. That's what may be possible now on Yemen.

The shortcomings of the current Congressional action must be known if we are to build on it. The Senate still must vote on cloture, on -- likely both good and terrible -- amendments, and on final passage. And then there's the House, and then there's the threatened veto, and then there's the question of expecting compliance from a president explicitly granted immunity from impeachment by Nancy Pelosi, by preemptive strike as it were. And then there's that loophole that allows any war to roll on that claims to be against Al Qaeda. The fact that the U.S. and Saudi Arabia have been partnering with Al Qaeda on the destruction of Yemen is absolutely no reason the White House won't claim the war is against Al Qaeda.

Understanding all of that should make clear to us that a long-term and relentless public education and mobilization campaign is needed locally and globally, and that the notion of a "good war" must be disallowed and defunded along with the murdering of Yemeni families. We must encourage Congress to get a move on with each step it takes, even while condemning legislation that violates the U.N. Charter and the Kellogg-Briand Pact by claiming to allow certain varieties of the crime of war. The notion that Saudi Arabia should not be helped out in the murder of tens of thousands and potentially millions of people because it murdered one particular person (Jamal Khashoggi) must be permitted to accomplish whatever good it can, even while we work to help people see through the idea that selling bombs only to nations that don't "violate human rights" is a piece of grotesque nonsense, as there is no use of bombs that respects human rights. Banning weapons sales to Saudi Arabia, for whatever reasons, is a step that must be taken in addition to -- and if possible by amendment to -- the legislation that would cut off U.S. military participation in the slaughter.

All of that being grasped, the fact remains that there is a reason that Trump has threatened a veto, and a reason that he sent Pompeo and Mattis scurrying over to the Senate to beg and plead for genocide, even though they apparently had nothing whatsoever to use to persuade even some of the most bloodthirsty senators ever to have lived. The White House and Pentagon and State Department are horrified at the prospect of the Congress, after a couple of centuries of ever increasing slumber, waking up and doing its job and stopping a war. Imagine if this were to really happen. What would prevent some Congress member's brain from stumbling across the thought that if one war could be ended, another might be as well? What would prevent ending a half dozen of the ghastly horrors? What would prevent Congress members from hearing people's screams immediately upon the start of each new war and voting immediately to block any war? This is the nightmare that keeps weapons profiteers tossing and turning in their gold-plated beds.

Why were 55 Senators for Genocide reduced to 37? Three reasons: public pressure, the murder of Khashoggi, and the fact that the Pentagon told a bunch of simplistic lies and made a bunch of baseless promises eight months ago and didn't think up anything new to explain them away this time around. Each of these three reasons is encouraging and worth building on.

1. The relentless lie that the corruption is complete and that the public cannot have any influence has to be torn down as many times as it takes. If people were aware that public pressure was a big influence on last week's vote, there would be a 100-fold increase in public pressure.

2. While it seems ridiculous to turn against the murder of thousands of people because of the murder of one person, that very sort of nonsense has always been available in every war. U.S. war efforts and those of their allies are always accompanied by vicious outrages outside of the framework typically thought of as the war. Saudi Arabia publicly murders or whips people in small numbers all the time. Ukrainian Nazis are no better. (An anniversary of the Odessa Massacre is coming up.) Allies in Afghanistan and Iraq make the Mafia look like a peace and justice club. Allies being courted for a hoped-for war on Iran make Ukrainian Nazis look like a pink p*ssy-hat march. More study is needed of how a particular atrocity can be forced into the U.S. corporate media.

3. When a White House loses credibility even with U.S. Senators, something else is going on that needs to be encouraged and promoted. The U.S. public may not have rushed into the streets when Obama's wars became Trump's, but certain parts of the corporate elite and the silent middle-class and even of the U.S. government have lost their faith in the redemptive power of genocide. Any wedge that can now be placed between Congress and the White House that could lead to Congress actually doing its job might work wonders.

The war on Yemen is killing directly through violence, but more so through the cut-off of supplies and through environmental destruction and the destruction of public resources -- results that lead to starvation and disease. People don't have food. People don't have clean water. People are afraid to leave their houses. In comparison with this state of affairs, fairy tales about Muslim Mexicans stealing your job seem downright charming.

A Congress that actually did its job would be subpoenaing and making public U.S. military plans for major permanent U.S. bases in the aftermath of Yemen, which I'd bet you a MAGA hat do exist. Most of the rest of the world has been coated with U.S. bases. A major global conference was just held in Ireland on the topic of how to close U.S. bases. A U.S. coalition just announced a proposal on Capitol Hill. The struggles against U.S. bases in Japan and many other places are at fever pitch.

Foreign bases are not just provokers and instigators of war. They're not just tools for propping up brutal dictatorships. They're not just the secrets to be hushed up during each future chorus of "But why do they hate us?" They're not just zones of rape and drunkenness and resentment. They're not just carcinogenic chemical leaks living under legal immunity. They're not just would-have-been EPA Superfund Sites to never benefit from any minor pretense of a cleanup because they're not in the United States. They're also this: a threat to global water supplies. Pat Elder has summarized this latest toxic development:

"The water in thousands of wells in and around U.S. military installations across the globe have been tested and have been shown to contain harmful levels of PFOS and PFOA. The health effects of exposure to these chemicals include frequent miscarriages and other severe pregnancy complications, like long-term fertility issues. They contaminate human breast milk and sicken breast-feeding babies. PFOS and PFOA contribute to liver damage, kidney cancer, high cholesterol, decreased response to vaccines, an increased risk of thyroid disease, along with testicular cancer, micro-penis, and low sperm count in males."

David Swanson is the author of "When the World Outlawed War," "War Is A Lie" and "Daybreak: Undoing the Imperial Presidency and Forming a More Perfect Union." He blogs at http://davidswanson.org and http://warisacrime.org and works for the online (more...)
Related Topic(s): Green New Deal, Add Tags
Add to My Group(s)
Go To Commenting
The views expressed herein are the sole responsibility of the author and do not necessarily reflect those of this website or its editors.