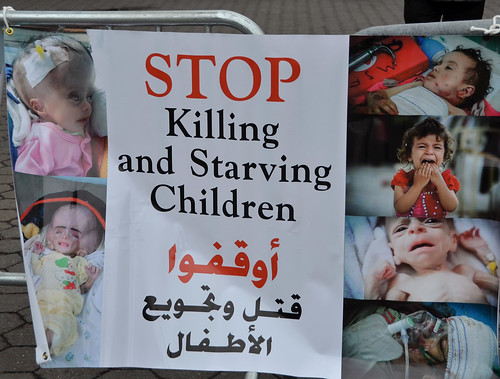 Fellow Citizens of Mother Earth - Yemen is being destroyed in front of our eyes. It's not just Saudi Arabia hat does the job for the West, particularly for the United States, but Europe is an integral part of this murderous destruction of one of the poorest countries on earth. Europe, the UK, France, Germany - and of course the US, supply the Saudis with the latest most sophisticated weaponry. It's a financial bonanza for the war industry - and it buys the cowardice European Union kudos with their Washington / NATO masters.

Yemen is a country close to my heart. One of the poorest countries of the world; and one of the driest countries in the world. I have worked for more than seven years with these wonderful people, helping them with water supply. The war, supported by spineless Europe, has destroyed it all, like so much other badly needed infrastructure. - War is the most profitable business there is - and it thrives in our dystopian world.

Europe has no backbone - probably never had. Europe has a thousand year-plus history of exploiting the weak and powerless, living off the riches of others - think of colonies all around the globe, slavery throughout the world - brought to the Americas.

Now - annihilating the Middle East for no reason at all, other than for stealing resources, for grabbing power and control; hoping for some gold crumbs... or bread crumbs rather that the master will leave on the wayside. That's Europe. The European Union could stop this war against Yemen at once, as they could stop the sanctions against Iran, and the constant lie- and deceit-loaded denigration of Russia, and the never-ending bashing of China. The EU is a shameful group of countries with no proper autonomy, no sovereignty - totally sold to Washington, to put it benignly.

The fourth batch of Yemeni detainees has arrived the in Sana'a as part of the largest prisoner swap between the country's warring sides. The residents in the capital received 112 prisoners after their plane landed in the Sana'a international airport. 1-thousand 81 men will be released in two days.

A two-day prisoner swap between Yemen's warring sides is underway. The move is part of a deal reached last month in Switzerland. Here is a report:

Yemen's warring sides are exchanging detainees in the largest prisoner swap between the Ansarullah movement and the Saudi-backed former regime. One-thousand eighty-one men will be freed in a two-day swap. -Hussein al-Bukhaiti - Political Commentator

The exchange was agreed last month after a week of negotiations in Switzerland. The prisoner swap is being overseen by the International Committee of the Red Cross. Analysts believe the exchange is a victory for Yemen's Ansarullah movement. - Naseh Shaker - Political Analyst

"Today's release operation, led by the I-C-R-C, is another sign that peaceful dialogue can deliver. I hope the parties will soon reconvene under UN auspices to discuss the release of all conflict-related prisoners and detainees." - Martin Griffiths, UN special envoy for Yemen.

Saudi Arabia and a number of its regional allies launched a devastating war on Yemen in March 2015 in order to bring former president Abd Rabbuh Mansur Hadi back to power.

Peter Koenig is an economist and geopolitical analyst. He is also a water resources and environmental specialist. He worked for over 30 years with the World Bank and the World Health Organization around the world in the fields of environment and water. He lectures at universities in the US, Europe and South America. He writes regularly for Global Research; ICH; New Eastern Outlook (NEO); RT; Countercurrents, (more...)
Related Topic(s): Yemen War, Add Tags
Add to My Group(s)
Go To Commenting
The views expressed herein are the sole responsibility of the author and do not necessarily reflect those of this website or its editors.