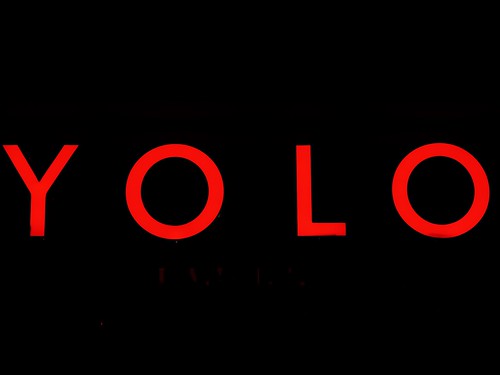 The explosion of interest in the rise and fall of GameStop stock, caused by the millions of Redditors on WallStreetBets, is based on YOLO philosophy. But YOLO is nothing new. I'm wondering about other examples of YOLO thinking, particularly in politics and leadership.

YOLO stands for You Only Live Once. The idea of YOLO investing is to take big, gambling risks that you can catch a stock while it is going up, before it crashes. That's how the mostly under 40 people on WallStreet Bets approach investing-- as total gambling.

YOLO can be a good thing. You take a vacation or try something out, like some exotic food, that you've never eaten before. But when you apply yolo thinking to a political approach, it can get dangerous. It can be built on narcissistic impulsivity. The economic idea that the "Market" has wisdom and so it responds to people's needs can really get topsy turvy if gambling, self-centered YOLO thinking replaces responsible caring and leadership that takes care of all the people.

In Texas, we're seeing YOLO thinking doing incredible damage-- seven million people without power or drinkable water. That's because they went cheap, without regulations, cutting their power grid off from other national grids so they could cut corners and regulations. YOLO!

And then there's the news that the lifespan in the US has dropped a full year-- three years for non-latino blacks. This is YOLO at work-- particularly Trump's and his Republican Governor allies-- choosing (not failing) to take adequate steps and measures to protect people. This kind of YOLO thinking kills people, massive amounts of people.

A Washington Post article, by Catherine Rampell, This is the YOLO presidency explored the idea back in March 2020.

"All of which is to say: Why isn't the Trump administration even the tiniest bit forward-looking? Don't these people realize they'll look foolish when, within days or hours or even minutes, their confident decrees are proved wrong?

Alas, this is what happens when an administration governs like there's no tomorrow.

The most important lesson Trump learned from both his business days and his political career is that there are no consequences. Ever. For anything. He can lie. He can cheat. He can move goal posts. He can break his promises about deficits or who will pay for the wall. He can renege on international trade deals or private contracts for chandeliers.

Yet he never pays a penalty, at least not politically. His followers forgive and forget.

Understandably, then, he behaves like the protagonist in "Groundhog Day" (at least in the first part of the film): He does whatever he expects to bring the biggest short-term payoff today, since he can count on a reset tomorrow.

Unfortunately for those he governs, the president has become almost pathologically incapable of thinking about the future."

Related Topic(s): Gamestop; Health- Mental-Sociopath-Narcissism; Life Span; Living, Add Tags
Add to My Group(s)
Go To Commenting
The views expressed herein are the sole responsibility of the author and do not necessarily reflect those of this website or its editors.