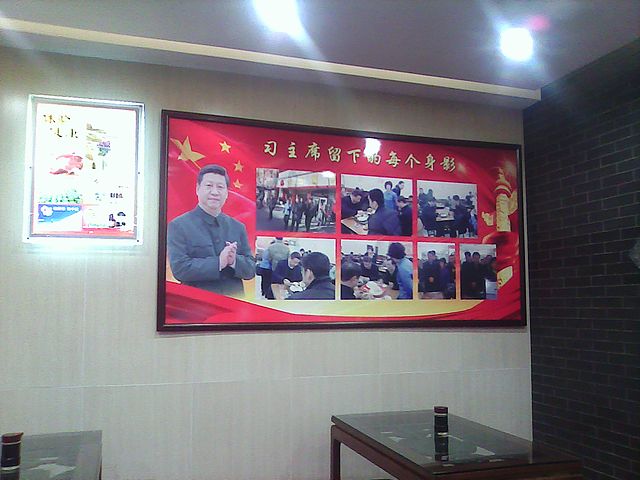 Xi Jinping Portrait
(Image by (From Wikimedia) Great Brightstar, Author: Great Brightstar)   Details   Source   DMCA
Xi Jinping's anointment as the 'President of China for Life' has sparked old, buried memories of the horrific days of Mao's Cultural Revolution. Those were the days, about 52 years ago, when unruly mobs comprising students and soldiers were unleashed on all those who opposed or seen to be in opposition to Mao's ambition fuelled by paranoia to become the unbridled leader of the country. Many today view Xi's decision to rewrite the country's constitution as no different from Mao's megalomaniac drive to become 'supreme ruler'.

During the Cultural Revolution, as the violent and oppressive drive was labelled, lasted almost a decade; it resulted in the death of over 1.5 million people, forced incarceration of several more millions who suffered torture and inhuman conditions in prisons. Children lost their schooling days to run propaganda marches. Women became slaves to ideological monsters. And hundreds and thousands found themselves without a source of employment. Since then, both the state and people have tried not to look back and if there were some attempts on the part of scholars to probe the past, they were quietly but forcefully discouraged from doing so. The past was buried deep.

The scholars, closely studying China's rise as an economic and military powerhouse believe that Xi is keen on keeping a tight lid over the disturbing phases of the Community Party's history, especially the madness wrought on the people by Mao. Xi himself is a victim of Cultural Revolution. This is also a contributory factor, according to Frank Dikotter, for Xi's resolve to excise true knowledge of the gory past from the country's collective consciousness. The shutdown of two private museums on the Cultural Revolution and of the websites that posted the memoirs of victims of the Cultural Revolution are clear signs of Xi Jinping's policy.

Xi Jinping is not Mao but he exhibits the same ambition and drive to hold power at any cost. Unlike Mao, who believed in disruption of the status quo, Xi is convinced that he alone can set his country to greater glory. Moreover, he firmly believes is China's destiny as the global superpower -- a belief not shared by many in the Communist Party of China (CPC).

Early in his first term itself, President Xi made it clear that he would not like his two predecessors demit office quietly after two five-year terms he was entitled to under the Constitution.

This two-term clause was introduced into the Constitution after the disastrous Cultural Revolution. To begin with, he managed to declare himself a 'core leader' and then used the party and state machine, including the subservient local media, to create a larger than life image of his, as the supreme leader. He had set aside in the process what Deng Xiaoping, Mao's successor, had termed building "the fate of a country on the renown of one or two people" as "very unhealthy and very dangerous". And got his "Xi Jinping Thought" statutory status by incorporating it in the party constitution last year

Now, Xi Jinping's grand vision of himself remaining at the helm for a lifetime is nudging the ghosts of the horrible past to haunt those who never forgot. No surprise, therefore, Li Datong, a former editor with vivid memories of the past, was quick to remind the nation and the leadership that the Communist party had introduced term limits "after the immense suffering [wreaked] by the Cultural Revolution". He wrote: "......there is emphatically no reason to move in the reverse direction"abolishing term limits would plant the seed once again of chaos in China, causing untold damage".

During the Cultural Revolution, Li Datong was exiled to Inner Magnolia; his father had his legs broken and was confined to cow shed over a decade. In an interview with The Observer, he said China was on the verge of an ''even darker and more terrifying situation" than it faced during the Mao era upheaval. His question that has resonated through the liberal quarters of China is: "How can you allow such a dictatorship to recur?"

With the mighty Chinese state military machine already on an overdrive to squash any squeak of dissent or protest, there is nothing on the surface to detect public anxiety. But like the Tiananmen Square episode, it might erupt anytime, either on the street or on the cyber way.

It is not only Chinese, who are anxious about their leader's decision to rule 'forever', but also the neighbouring countries which have had a troubling experience with President Xi Jinping regime. Xi views himself as a military strongman and has ensured that his message of military dominance goes out to the countries in the neighbourhood, especially those who have territorial disputes with China. His 'great love' for the nuclear-armed rogue country like Pakistan, which finds a place on the International Terrorism-financing Watch List is no less a cause of worry for the international community. So much so, with Xi assuming unbridled powers in Beijing, the world has become an even more unsure place.

management consultant by profession I live in Boston and frequent Asia and Far East on business trips. Like most of my ilk, I am also a blogger and hit the blogspace at irregular intervals though. My subjects of interest are wide ranging from (more...)
Related Topic(s): Chaos; Consciousness; Dissent; Dominance; Economic; Leader; Military; Paranoia; Policy; Revolution; (more...) Shutdown; Websites, Add Tags  (less...)
Add to My Group(s)
Go To Commenting
The views expressed herein are the sole responsibility of the author and do not necessarily reflect those of this website or its editors.