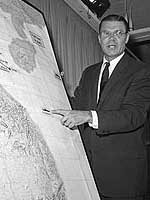 Former U.S. Defense Secretary Robert McNamara is dead. He died in his sleep at 5:30 a.m. Monday. He was 93.

There is a monument dedicated to his military and geopolitical expertise in Washington, D.C.  It is the Vietnam War Memorial. It lists the names of 58 thousand dead Americans who were sent to their deaths because McNamara -- a former president of Ford Motor Company -- was given the power to intervene (in whatever manner he chose) in a civil war in Southeast Asia that became yet another chapter in the insanity that was the Cold War.

In addition to the 58 thousand Americans, at least 2.5 million Indochinese -- most of whom were Vietnamese -- also were killed. All of these people -- thousands of soldiers, hundreds of thousands of civilians -- had their lives ripped from them as a direct result of the actions McNamara took in his dedication to the belief in the absolute primacy of American Corporatism and the need to force that belief on as much of the world as we could, no matter the consequences; no matter the destruction or the number of dead and crippled or the mentally destroyed.

By his own definition he was a War Criminal. Any action that is necessary to define that term -- war criminal -- was an action taken by Robert McNamara. From the fire bombing of Vietnamese cities and the subsequent murder of tens of thousands of innocent civilians to the establishment of murderous "free fire" zones in the countryside, McNamara's killing spree was without limits, without restriction, completely outside the rules of war so carefully crafted by the world's "civilized" societies.

The curious can read McNamara's biography here. However, his true legacy is to be found in American men now in their 60s who still carry the with them the memories of the war crimes perpetrated against yet another innocent country the United States decided to invade and destroy. His legacy also can be found in the monuments scattered throughout Vietnam -- memorials to the death and destruction caused for no sane reason by the United States. Or in the hideous genetic deformities still occurring in newborns -- nearly 40 years after the war ended in the worst defeat for the U.S. in its history -- that are a direct result of the United States saturating Vietnam in a poisonous flood of the deadly herbicide Agent Orange.

The list of crimes against humanity committed by the United States in Vietnam is a long one. It is a list too horrifying for us to acknowledge. To do so would bring an end to whatever belief still remains here in our sad, broken country that the United States operated honorably during the bloody and war-eaten 20th Century. And we Americans are not ready for that -- especially not now, not at a time when the record shows we have become a nation whose highest elected officials ordered the torture of men charged with no crime and given no rights in order to extract phony "confessions." A nation whose leaders see nothing wrong in saturating yet another country with yet another toxic substance -- this time explosives made with depleted uranium -- that is already producing thousands of horrific birth defects and hideous cancers.  So . . . there will be no acknowledgement, no discussion, no truth, no reconciliation. Not now. Maybe never.

Our century-long history of lies employed in the expansion of empire, crimes against humanity, wars of opportunity, and the wanton killing of millions of innocent civilians is a history in which Robert McNamara fits easily and comfortably.

Also - on a totally unrelated note -- you must watch this video -- it's important: A Peaceful July 4th Party In W. Virginia Invaded By Monsters

Mike Malloy is a former writer and producer for CNN (1984-87) and CNN-International (2000). His professional experience includes newspaper columnist and editor, writer, rock concert producer and actor. He is the only radio talk show host in America to have received the A.I.R (Achievement in Radio) Award in both (more...)
Related Topic(s): Death; History; Legacy; Military Deaths; Robert McNamara; Vietnam; Wars, Add Tags
Add to My Group(s)
Go To Commenting
The views expressed herein are the sole responsibility of the author and do not necessarily reflect those of this website or its editors.