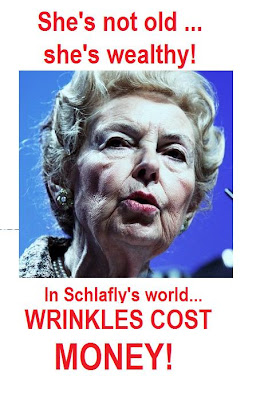 I'm getting wrinkles and I can't afford them. You see, thanks to America's slash-everything conservatives, wrinkles cost money. Sure, face-lifts cost a lot, but the fierce Republican Congress, by threatening to eradicate Social Security and Medicare, have made wrinkles just as expensive. It won't be long until wrinkles will become a status symbol because anyone lasting long enough to have them will obviously be rich enough to afford them.

And the nation's politicians have made it clear that Town Halls are filled with elderly demanding to know why their elected officials have come to consider them so ... expendable. They've met with some blunt and, frankly, cold-hearted answers.

Of course, the kinder ones have told the elderly that they should depend upon their families for support. The problem with that advice is that the "family values" people forget how some of them acted during the country's AIDS crisis.* *

Anyway, the poor elderly have no right to exist, even God says so:

According to Pastor Matt  Trewhella :

3.   Social Security violates God's work ethic.   The Bible has much to say against laziness. Sluggards and sloths are mentioned 15 times in the book of Proverbs alone. Proverbs 26:14 states, "As the door turns upon its hinges, so doth the slothful upon his bed." The Bible extols the virtues of hard work, yet says nothing about retirement. God requires us to be honest and industrious and to help our  neighbor in their need. Retirement is what Americans look forward to in order to pursue their own self-interests such as golf and fishing. Rarely is retirement used as an opportunity for further service to God.

And God-fearing  Dominionists  know that programs like Medicare are  not God's economics.

Am I missing something here? Is the Right Wing (esp. the Christian Right Wing) conducting some kind of poor senior genocide? OK, I won't go into any stupid conspiracy theory,*** but open disdain for the poor and elderly has become alarming.

Guilty To Die Too Soon

I'm a caregiver for my ex partner who is only 48 and has terminal liver cancer. The irony about his situation is that he feels guilty about dying too soon: he doesn't want to leave me or any one of our friends in the quagmire that will be the fate of  what he sees as a vicious, greedy and righteously arrogant society. And while I'm angry at becoming one amongst the ranks of expendables, I'm angrier that it worries him even more than it worries me. His concern makes me feel like going into a "senior closet": if the people in power want us to disappear, then I may have to get a fake ID, some facial  spackle , a skate board and join Rick Warren's  Saddleback  Church (it has a skateboard park).

I may have to cancel my birthday party as well. Pity. I was going to have the DJ at the local bar play a life-affirming tune:

*I would have provided the YouTube link, but the corresponding video has been pulled. I wonder why?

**Most of the people with AIDS who were evicted from their homes were God-fearing Southern Baptists. I know. Ask me about it.

*** Since I've succumbed to the Conspiracy Theory craze, I actually do have one, but you'll have to read about it later.

Rev. Dan Vojir is has been writing/blogging on religion and politics for the better part of ten years. A former radio talk show host (Strictly Books " Talk America Radio Network) and book publisher, Dan has connected with some of the most (more...)
Related Topic(s): Ageism; Birthday; Elderly-Seniors; Genocide; God; Laziness; Medicare; Needy; Phyllis Schlafly; Republican Budget; (more...) Republican Party Budget Cuts; Retirement, Add Tags  (less...)
Add to My Group(s)
Go To Commenting
The views expressed herein are the sole responsibility of the author and do not necessarily reflect those of this website or its editors.