Trump's evil border policy is a look-the-other-way, not-my-fault species of moral putrefaction brought to you by the most ostentatiously Christian political party in one of the most noisily Christian nations on Earth 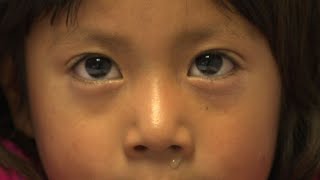 What if God were one of us?

Singer Joan Osborne famously asked that question in 1995. In her Grammy-nominated hit, "One Of Us," she envisions the author of all creation as "a slob like one of us, just a stranger on a bus trying to make his way home."

The idea of eternity contained in mortality was controversial. But it turns out that envisioning God as "one of us" is not at all uncommon. Indeed, our conceptions of God tend to be colored, perhaps inevitably, by our social affiliations. So says a new study in which University of North Carolina at Chapel Hill researchers tested 511 American Christians to see how they envision God.

The one thing respondents agreed on was that God does not resemble Michelangelo's stern old white man with a flowing beard. Other than that, there was no consensus. African Americans saw a God with African-American features. Young people saw a younger God. Liberals saw a loving God with younger, more feminine features. Conservatives saw a God who was white, older and who radiated power.

In other words, when we see God, we see ourselves and our values. But we may want to look again.

Granted, the Christian Bible offers no description. It does, however, say that God is love. And it does obligate God's people to love their neighbors.

Consider that, then consider this: On the same day the study was reported, CNN.com ran a story about an undocumented immigrant from Honduras who says federal authorities grabbed her infant daughter from her as the baby was being breastfed. When the mother complained, she was handcuffed.

It was just the latest outrage of the government's so-called "zero tolerance" immigration policy, i.e., its decision to criminally prosecute every person who attempts to illegally cross the U.S. border. Until that decision last month, detainees primarily faced civil deportation hearings.

Since that decision, hundreds of children have been separated from their parents. Some detainees say U.S. officials told them their children were being taken for baths, then stole them away. They say no one will tell them where their kids are. Toddlers are being left in an unknown land with strangers, crying for parents they cannot find. The emotional trauma America is inflicting on these kids is incalculable.

Let's be clear. No policy of any previous administration justifies this act of state-sponsored cruelty. No concern over border security excuses it. What our country is doing -- what we are doing -- is not "wrong," it is not "bad," it is not "misguided."

No, this is evil -- a just-following-orders, look-the-other-way, not-my-fault species of moral putrefaction brought to you by the most ostentatiously Christian political party in one of the most noisily Christian nations on Earth. The hypocrisy of it reeks to, well...high heaven.

After all, the research says we tend to see God as an idealized version of ourselves. But members of that ostentatiously Christian party should ask themselves: Would God really snatch a suckling baby from its mother's breast? And if the answer is No, does it not suggest that they have made a deity of their fears and animosities, reposed their faith in their own righteous anger?

commondreams.org is a progressive publisher
Related Topic(s): Children; Detainees; God; Immigration; Parents, Add Tags
Add to My Group(s)
Go To Commenting
The views expressed herein are the sole responsibility of the author and do not necessarily reflect those of this website or its editors.