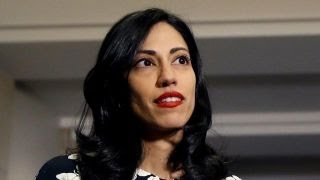 President Donald Trump called (again) last week for the Justice Department to initiate a criminal investigation of former Hillary Clinton aide Huma Abedin after the State Department posted thousands of emails and other documents that were found on the laptop of Abedin's estranged husband, former congressman and current federal sex offender Anthony Weiner. Most mainstream media outlets ran the story for a day, dismissed Trump as being deranged, and moved on to other news. I think there is something more to this.

I want to go on record as saying that I don't think Huma Abedin should be arrested. She's already been investigated, and the Justice Department found that she had not committed a crime. Sure, there were classified documents on her husband's computer, but she did not appear to have had any criminal intent when she put them there. She was sloppy, careless, perhaps lazy. She wanted all of her classified passwords in one place. And that place wasn't on her classified system; it was at home, on her unclassified system. It's certainly a fireable offense, but it doesn't rise to the level of criminal behavior.

Except in the Eastern District of Virginia in the courtroom of Judge Leonie Brinkema.

Judge Brinkema made a ruling in my case that set legal precedent and that was such a dangerous development that virtually anybody with a security clearance could be charged with espionage if the government decided that they didn't like their politics. (I was charged with three counts of espionage after blowing the whistle on the CIA's torture program. All of those charges were dropped, and I eventually pleaded guilty to a lesser charge to make the case go away; I was facing 45 years in prison. I served 23 months.)

In United States v. Kiriakou, Brinkema held that in cases involving the Espionage Act, the government need not prove any criminal intent whatsoever. She said that a person could commit espionage "accidentally," and that intent, or lack thereof, was not a defense. This was in direct contrast to another judge's ruling in NSA whistleblower Tom Drake's case, where even if Drake had exposed classified information (which he hadn't), he lacked any criminal intent. The case against him fell apart and all felony charges were dropped. But Brinkema's ruling left me with no defense.

Let's look, then, at what Huma Abedin did. As the Washington Post reported on January 2...

"The president's tweet (calling for Abedin's arrest) comes just days after the State Department posted online thousands of Abedin's emails, which were captured on the computer of Anthony Weiner, her estranged husband. Those emails -- some of which contained classified information -- spurred the FBI in October [2016] to reopen its investigation into Clinton's use of a private email server while she was secretary of state, although the bureau would ultimately conclude that the messages gave them no reason to change their conclusion not to recommend charges against Clinton or any of her aides."

That's all fine and good. But according to Brinkema's interpretation of the law, Abedin (and Clinton, for that matter) violated the Espionage Act. At its most lenient, this violation calls for up to five years in a federal prison. At worst, it's life without parole.

That's preposterous, of course. But so was the Obama administration's use of the Espionage Act as an iron fist to stamp out dissent within the US intelligence community. Obama's attorney general, Eric Holder, prosecuted eight people under the Espionage Act for allegedly giving classified information to the press. That's nearly three times the number of prosecutions under all previous presidents combined. Trump has, at least so far, continued that policy with the arrest, incarceration, and prosecution of Reality Winner. And with Jefferson Beauregard Sessions III at the Justice Department, we should only expect the worst.

Second, Leonie Brinkema must go. Appointed to the federal bench by Reagan and elevated by Clinton, she obviously hasn't read a law book in a long time. There's no place for her reactionary judicial activism in today's America.

Related Topic(s): Email; Eric Holder; Huma Abedin; Justice; Politics, Add Tags
Add to My Group(s)
Go To Commenting
The views expressed herein are the sole responsibility of the author and do not necessarily reflect those of this website or its editors.