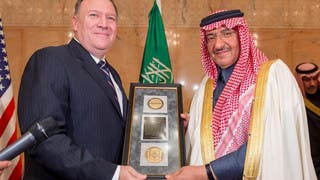 On Friday, the Director of the CIA, Mike Pompeo, used his first trip abroad to present Saudi Arabia's Crown Prince Mohammed bin Nayef with the CIA's highest award for fighting terrorism, the George Tenet Medal. Although the ceremony wasn't covered by any of the major media, it was picked up on various blogsites where the news was greeted with predictable howls of outrage. Not surprisingly, most American's still see Saudi Arabia as the epicenter of global terrorism, a point which was underlined in a recent article at The Atlantic titled "Where America's Terrorists Actually Come From." Here's an excerpt:

"...after sifting through databases, media reports, court documents, and other sources, Alex Nowrasteh, an immigration expert at the libertarian Cato Institute, has arrived at a striking finding: Nationals of the seven countries singled out by Trump have killed zero people in terrorist attacks on U.S. soil between 1975 and 2015.

"Nowrasteh has listed foreign-born individuals who committed or were convicted of attempting to commit a terrorist attack on U.S. soil by their country of origin and the number of people they killed... the countries at the top of the list, including Saudi Arabia and Egypt, are not included in Trump's ban...

"The 9/11 attacks were carried out by 19 men -- from Saudi Arabia (15), the United Arab Emirates (2), Egypt (1), and Lebanon (1). The incident remains influential in how Americans think about the nature of terrorism." ("Where America's Terrorists Actually Come From," The Atlantic)

While it's true that 9-11 has shaped the way that Americans think about terrorism, it's also true that most people are unaware of the deeper operational relationship between the CIA and the Saudis that dates back to the funding of the Mujahidin in Afghanistan in the 1970's. This is where bin Laden and al Qaida first burst onto the scene, which is to say, that the sketchy CIA-Saudi connection created the seedbed for the War on Terror. Unfortunately, even now-- 16 years after the attacks of 9-11 -- the relationship between the notorious intel agency and its Middle East allies remains as foggy as ever. As a result, the Saudis are typically fingered as the main source of the problem while the CIA's role is conveniently swept under the rug. For example, take a look at this clip from an article in the Independent:

"Saudi Arabia is the single biggest contributor to the funding of Islamic extremism and is unwilling to cut off the money supply, according to a leaked note from Hillary Clinton.

"The US Secretary of State says in a secret memorandum that donors in the kingdom still 'constitute the most significant source of funding to Sunni terrorist groups worldwide' and that 'it has been an ongoing challenge to persuade Saudi officials to treat terrorist financing emanating from Saudi Arabia as a strategic priority...'

"Saudi Arabia is accused, along with Qatar, Kuwait and the United Arab Emirates, of failing to prevent some of its richest citizens financing the insurgency against Nato troops in Afghanistan. Fund-raisers from the Taliban regularly travel to UAE to take advantage of its weak borders and financial regulation to launder money.

"However, it is Saudi Arabia that receives the harshest assessment. The country from which Osama bin Laden and most of the 9/11 terrorists originated, according to Mrs Clinton, 'a critical financial support base for al-Qa'ida, the Taliban, Lashkar-e-Toiba and other terrorist groups, including Hamas, which probably raise millions of dollars annually from Saudi sources, often during the Haj and Ramadan.'" ("Saudi Arabia is 'biggest funder' of terrorists," Independent)

Then there's this gem from ex-Vice President Joe Biden:

"Biden said that 'our biggest problem is our allies' who are engaged in a proxy Sunni-Shiite war against Syrian President Bashar Assad. He specifically named Turkey, Saudi Arabia and the UAE.

"'What did they do? They poured hundreds of millions of dollars and thousands of tons of weapons into anyone who would fight against Assad -- except that the people who were being supplied were (Jabhat) Al-Nusra and al-Qaeda and the extremist elements of jihadis coming from other parts of the world,' Mr Biden said." ("Joe Biden forced to apologize to UAE and Turkey over Syria remarks," Telegraph)

The evidence against Saudi Arabia is overwhelming and damning, and that's what makes Pompeo's performance in Riyadh so confusing. Why is the head of the CIA bestowing an award on a man who could undoubtedly identify some of the world's biggest terrorist donors, unless, of course, the CIA derives some benefit from the arrangement?

Related Topic(s): Awards; CIA; Saudi Arabia; Terrorism, Add Tags
Add to My Group(s)
Go To Commenting
The views expressed herein are the sole responsibility of the author and do not necessarily reflect those of this website or its editors.