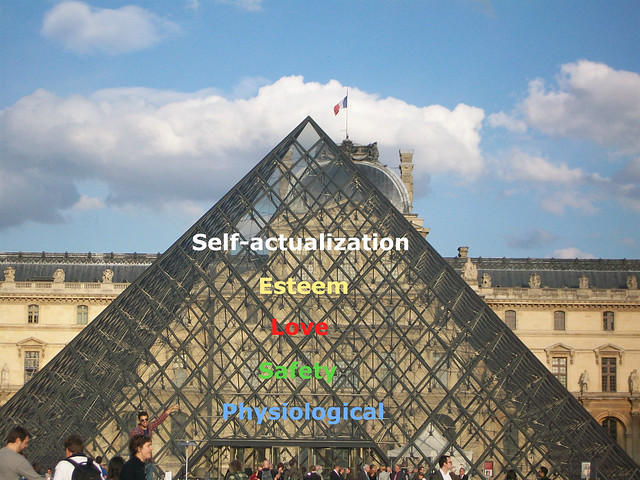 World Self-Actualization will occur when every person in every country has an equal opportunity to realize their fullest potential, and a majority of world citizens attain the highest expression of individual achievement, which in this new modified version of Maslow's Hierarchy is defined as compassionately working for world peace, global justice, ecological wisdom, and the happiness of every person on the planet. To achieve World Self-Actualization, we will have to make political changes and be spiritually transformed. Let us begin by discussing the political changes needed in the United States; other nations will need to make similar changes.

This article focuses primarily on political theory. Every world citizen must carefully consider what are the highest ideals worth striving for, even if it will take several generations to accomplish them. The world will significantly improve when enough people with a common dream fight for what is right.

Direct democracy could work even in a large city because only the individuals most concerned about particular issues would show up, possibly at the local stadium, to voice their opinions in face-to-face discussions before voting on an issue after several days of deliberation. It is time to start exploring ways to make direct democracy at each municipality a reality.

Representative democracy is still needed at national and state levels as stated above. But we must change the system so that our national and state representatives represent us, the 99 percent, instead of representing the Deep State, the military-industrial complex, the Shadow Government, and the transnational corporations. The Deep State involves people in government, and the Shadow Government includes those who pull strings from behind the scenes in support of the Deep State. Christian conservative, ex-CIA member, Kevin Shipp, in youtube videos has revealed amazing things about how the secret government is organized. Kevin Shipp, seemingly a Trump supporter, argues there is a Deep State plot against Donald Trump. Trump may not represent the Deep State, but then many on the left would say Trump still represents the interests of the one percent.

Instead of working for the self-actualization of every person in every nation, the one percent have worked for the self-aggrandizement of themselves. If they continue to get their way, they will not be able to escape the world as the whole world unravels and our sacred earth is destroyed.

We can implement proportional representation in national and state legislatures, have Ranked Choice Voting, and we can abolish the Electoral College System for electing a president--without creating a new federal constitution. Ideally we should eliminate the U.S. Senate altogether because it is very undemocratic: California's population is much greater than Wyoming's, yet they both have the same number of senators. To abolish the U.S. Senate would require a new constitution. Eliminating the U.S Senate would create a unicameral legislature. But if we cannot immediately abolish the U.S. Senate altogether, we can start working to equally empower the 7 largest national political parties and use Ranked-Choice Voting to elect members of the U.S Senate.

If we had maximized democracy throughout the history of our nation, the following 9 social sins might not have manifested so perniciously: imperialism, nationalism, corporate capitalism, anti-environmentalism, racism, speciesism , materialistic lifestyle, patriarchy, and the discrimination against the LGBTQ community.

If the rich and powerful keep getting more control, they will create a hierarchical, fascist-type of new world order that the first George Bush glamorized. But what a lot of people do not realize is that it is possible and necessary to create a democratic world government. Now more than ever we must think globally with an international focus. To start, we could empower the General Assembly of United Nations, as we eliminate the unfair control that the Security Council has over the United Nations. There are other models for a democratic world government: The Earth Federation , The World Federalist Movement , The Earth Charter, World Citizen , and Garry Davis . If a world government is created democratically, it can be dismantled democratically if that is what the majority of world citizens desire.

Ethical, compassionate capitalism has not expressed itself yet in a world approaching ecological suicide. If not through a democratic form of socialism, we need to implement radical egalitarianism some other way, so that every person in every country has an equal opportunity to realize their fullest potential. That must be our longing and deepest desire. When every person has the opportunity to achieve self-actualization, we can create world peace, nurtured by love.

At the neighborhood block club and at city and county levels--we can encourage face-to-face, participatory, direct democracy. Today in many state and local elections, we have people just voting a straight ticket for many individuals whom they know nothing about. Instead, we could select our national and state legislators through a new system of proportional representation and then empower those legislators to, not only make laws, but make some appointments for executive and judicial branch government positions. This method makes the legislative branch more democratic and then gives it more power than the other two branches of government.

If we let all national political parties that capture at least one percent of the national vote be represented through proportional representation at a Constitutional Convention, we could create a much better national or federal constitution. One hundred delegates could meet for a maximum of 3 months, and if they create a new document approved by 51 percent of the delegates, it could be ratified later if a 51-percent majority of the American people approve the new constitution. Each of the 50 states can create new constitutions this way too.

Related Topic(s): Bottom-up; Citizens; Community; Democracy; Happiness; Interconnectedness; International; Peace; Spiritual; Workplace; (more...) World Peace; Worldview World View, Add Tags  (less...)
Add to My Group(s)
Go To Commenting
The views expressed herein are the sole responsibility of the author and do not necessarily reflect those of this website or its editors.