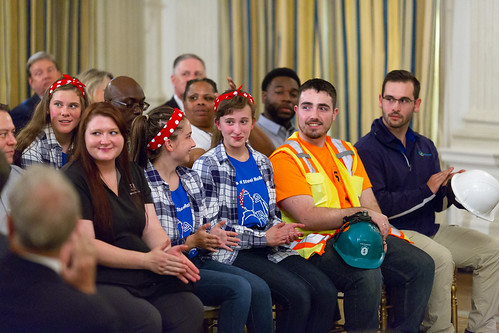 .Our Pledge to America's Workers.
(Image by The White House)   Details   DMCA

Working America is not afraid to get its hands dirty. It is not afraid of difficult challenges. It rolls up its sleeves and figures out how to solve problems. It is the backbone of America. It does not quit. It is the brawn and the brains of what makes this nation so significant. It is the epitome of what ordinary people do to make a life for themselves and others.

It is easy to take those workers for granted; to just assume that the garbage will be picked up, that the painters, or cooks, or farmers will be available when you need them and will fulfill their function dependably.

But in taking them for granted, we forget to give them the respect they deserve, and we often forget to compensate them adequately.

They understand their importance to making the whole society function well but feel devalued as human beings by our careless disregard about their lives. It grinds on them.

The last time they were more obviously valued was the 1930s and 1940s under FDR's New Deal when they were recognized as a crucial part of a healthy democracy. They helped rebuild American infrastructure and the American Spirit. And they fought to save the nation and our democracy by being the backbone of the military effort in WWII.

And then we began to lose our way as a nation, and in the process, we began to take those workers for granted again. They were given jobs to do and they did them well, but they began to see, as the emphasis shifted to money and power, that those in control didn't really take much time to consider and appreciate their role.

As they were stripped of their organized power with the slow death of unions, the focus shifted even more to those with wealth and the power that goes with it. Increases in productivity no longer led to higher pay or advancement. All the benefits of their hard work went to those on top. The workers became pawns in the competition for profits. They were often seen as expendable economic units to be used up and discarded as the need arose. They became an exploitable resource.

But they still recognized the significance of the work they did and how important it was to the health of the society. It was then that they began to grow discouraged and resentful, seeing how little voice and influence they had in choosing the direction of the society and their own lives.

The Democratic Party, who, from the New Deal on, based their strength on the support of the workers of the nation and those who understood the value of an inclusive democracy, now began to succumb to the temptations of the power of wealth in politics. In the process they began to forsake their working base.

But the Republican Party saw an opportunity to make inroads by redefining workers in terms of a less inclusive group comprised of white males. In the process the rest of the workers began to be excluded, other racial groups, women and immigrant populations who had the same hard-working ethic. The Republicans seemed to value and validate workers who were white, Christian, patriotic citizens whose root values were no longer the center of the nation. They could garner the support of these groups, especially if they accepted their anger, their hot issues, and and their prejudices; such things as their opposition to gun control, their anti-abortion stance, their distrust of immigrants and other races and religions and their willingness to demonize what they saw as a ruling elite making rules to control their lives.

If the Republicans could validate these views of the world, they could build a powerful support group, especially if they gave them permission to flaunt the ordinary rules of civility.

They simply implied that these workers saw the world correctly and agreed that those pointy-headed liberal elites with all their rules and restrictions had it all wrong. The Republicans agreed that the workers' anger was well-aimed.

This was especially effective if you could present a leader who had made his name by flaunting the rules and had gotten fabulously rich in the process. If they followed him faithfully, once the riffraff were expelled and they could be pure and free again, those workers could reap the benefits they knew were their due.

That left the Democrats responding with only a call for more civility and a return to the "same-old, same-old" of workers being taken for granted again.

Related Topic(s): American Culture; American Dream; American Renewal Project; American_History; Americans Together; Democracy; Democrats; Spirit; Work; Work; (more...) Workers; Working Families, Add Tags  (less...)
Add to My Group(s)
Go To Commenting
The views expressed herein are the sole responsibility of the author and do not necessarily reflect those of this website or its editors.