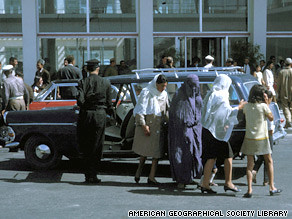 According to recently declassified records and admissions by Brzezinski and Robert Gates, it was a full six months before the Soviet invasion of Afghanistan in 1979 that the CIA began to arm the conservative Islamic resistance against the nominally Marxist regime. The regime consisted of young Afghans tired of seeing their people starving over the hundreds of years, and filled their heads with idealistic thoughts about everybody eating, without being affiliated with the Soviet Union. But that didn't matter to Ziggy. The word Marxist was enough. They had to be taken out.

Those commies believed in the education of women, and for a time Kabul opened up to the world and women even began to wear miniskirts, unharassed. Author and journalist Paul Fitzgerald, one of the first journalists to be granted access to the country after the Marxist coup of the Afghan monarch, says:

"Afghanistan had made significant strides in its efforts to modernize and construct a civilian democracy long before Pakistan was even invented. Afghanistan's progressive monarch gave women the right to vote in the 1920's while the rights guaranteed under its Constitution were debated openly and freely prior to the Soviet invasion."

What happened after the covert CIA attack of the Marxist Kabul government is history. We created the mujahadeen, some of whom split off to become the Taliban. Big mistake.

Afghanistan to this day is the most heavily landmined country in the world. On average 60 Afghans a month are still killed by landmines, most of them children who don't know what to look for as they play. There have been over 70,000 Afghan landmine victims since 1990. Where did all these landmines come from? Most of them the Russians planted, after the CIA drew them in by destabilizing the nominally-Marxist government (not atheist, their flag had the Crescent upon it) to "give them their own Vietnam." As soon as the mujahadeen drove the Soviets across the border, with the help of billions of dollars in CIA arms and a few Stinger missiles, we turned our back Afghanistan like a bad boyfriend. Over the next ten years over 2 million Afghans perished through starvation, cold winters, and fighting among the factions and warlords we had created, who were using the weapons they had left over.

Now Ziggy is whining that people are waking up, and that nations will be having a harder time getting people to fight each other. A report on a recent Council on Foreign Relations speech recounts:

"Mankind is now politically awakened and stirring," said Brzezinski, adding that this in combination with a fractured elite "makes it a much more difficult context for any major power, including currently the leading world power, the United States."

On the occasion of this week's vote on continued funding for military operations in Afghanistan, it is fitting to include a short, recent interview of Zbigniew Brzezinski. Read it and weep. Please ask your congressman to spare the Afghan people any more war. Vote no on war funding. How about a little help clearing those 8 million or so landmines which remain to this day instead, so that sticking a plow in the ground, to grow food, is not something which might get your legs blown off? We didn't plant them, the Russians did. But we had a little something to do with it.

No Regrets: How Jimmy Carter and I Started the Muj (Alexander Cockburn's Counterpunch)

Q: The former director of the CIA, Robert Gates, stated in his memoirs ["From the Shadows"], that American intelligence services began to aid the Mujahadeen in Afghanistan 6 months before the Soviet intervention. In this period you were the national security adviser to President Carter. You therefore played a role in this affair. Is that correct?

Brzezinski: Yes. According to the official version of history, CIA aid to the Mujahadeen began during 1980, that is to say, after the Soviet army invaded Afghanistan, 24 Dec 1979. But the reality, secretly guarded until now, is completely otherwise: Indeed, it was July 3, 1979 that President Carter signed the first directive for secret aid to the opponents of the pro-Soviet regime in Kabul. And that very day, I wrote a note to the president in which I explained to him that in my opinion this aid was going to induce a Soviet military intervention.

Q: Despite this risk, you were an advocate of this covert action. But perhaps you yourself desired this Soviet entry into war and looked to provoke it?