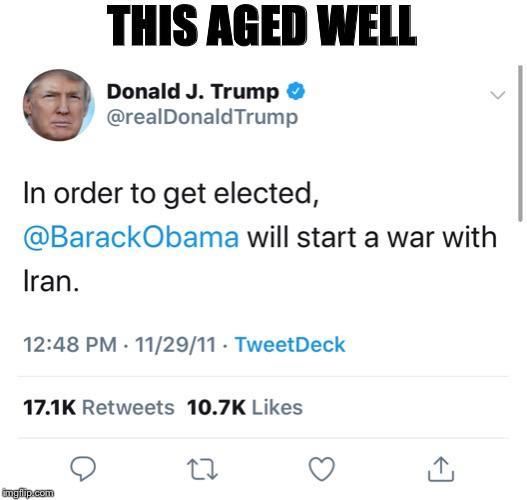 By the time President Bush disavowed this claim in 2006, the war he had lied the country into had been raging for three years.

He had gotten the war he admitted to journalist Mickey Herskowitz was necessary to get himself re-elected, so he no longer needed to promulgate the lie.

Facing similar international backlash over its targeted assassination of Iranian military leader general, Qassem Suleimani, the Trump administration is already using 9/11 as a justification to bring us to the precipice of World War III.

In a series of tweets, Vice President Mike Pence called Suleimani "an evil man who was responsible for killing thousands of Americans."

He also claimed Suleimani "assisted in the clandestine travel to Afghanistan of 10 of the 12 terrorists who carried out the September 11 terrorist attacks in the United States."

15 of them came from Saudi Arabia.

The rest were from the United Arab Emirates, Lebanon and Egypt.

There is also no evidence Suleimani was behind it.

The National Commission on Terrorist Attacks Upon the United States, aka the 9/11 Commission, confirmed as much in its official 600-page report.

"Several of the 9/11 hijackers (at least eight) transited Iran on their way to or from Afghanistan, taking advantage of the Iranian practice of not stamping Saudi passports. They deny any other reason for the hijackers' travel to Iran. They also deny any relationship between the hijackers and Hezbollah. We have found no evidence that Iran or Hezbollah was aware of the planning for what later became the 9/11 attack."

Suleimani's name was never even mentioned.

Unfortunately, it may not matter.

Related Topic(s): Iran; Military; Pence-Mike; Trump, Add Tags
Add to My Group(s)
Go To Commenting
The views expressed herein are the sole responsibility of the author and do not necessarily reflect those of this website or its editors.