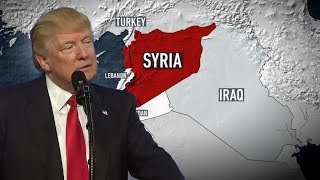 Trump Makes Deal With Turkey To Withdraw from Syria
(Image by YouTube, Channel: Signs of the Last Days)   Details   DMCA
>

According to various news reports, the validity of which is always questionable, US President Donald Trump has ordered the withdrawal of all US troops from the portion of Syria illegally occupied by US troops.

This report is surprising as only a few days ago the US Department of Defense declared that any Syrian, Russian, or Iranian action against ISIS in the part of Syria occupied by US troops was "unacceptable."

In other words, the Pentagon declared that the part of Syria still in ISIS's hands was under US protection and was not to be attacked by Syria and its allies.

The question before us: Is Trump's reported order of withdrawal going to happen?

It is too soon to say. As I write no support for Trump's withdrawal order has been reported in the media. Even the official statement by the White House's own spokesperson, Sarah Sanders, is unclear: "We have started returning United States troops home as we transition to the next phase of this campaign."

Perhaps a decision has been made to bypass Syria for now and to knock out Iran before the Russians can intervene there.

The presstitutes, at home and abroad, who serve Israel and the Military/Security Complex and never the Truth, are opposed to ending the campaign against Syria.

The Guardian, once a legitimate working class newspaper, but now to all appearances a CIA asset, writes that Trump's "walking away now is a remarkable gift for ISIS."

Bloomberg, continuing its campaign against Trump, reported that Trump's withdrawal order "left Washington's Kurdish allies in the lunch," subject to Turkey's disposal. Even worse, according to Bloomberg, Trump's withdrawal "leaves Syria's future in the hands of Moscow and Tehran, allies of President Bashar al-Assad whose intervention in the conflict averted his potential defeat."

Warmonger US Republican Senator Lindsey Graham, a total disgrace to the electorate who put and keeps this fool in office, quickly demurred from Trump's sensible decision. War forever is Graham's policy. It proves he is a tough guy who stands up for America.

Mark Dubowitz, chief executive officer of the Foundation for Defense of Democracies (an extinct political species in the West), who "has closely advised the Trump administration," said that "pulling U.S. troops out of Syria would be a gift to Putin and to the mullahs in Tehran. And it would be a disastrous gift for the region."

Brett McGurk, Trump's special envoy to the fake "global coalition to defeat ISIS," an organization created and financed to create deceptive cover for the support of ISIS, disavowed Trump's reported decision: "Enduring defeat of a group like this means you can't just defeat their physical space and then leave."

Israel, which has reduced the President of the United States to a two-bit Israeli puppet, as it intends to do also to President Putin of Russia, is unlikely to permit Trump to withdraw US troops from Syria.

Related Topic(s): Allies; Assad; Israel; Pentagon; Syria; Withdrawal, Add Tags
Add to My Group(s)
Go To Commenting
The views expressed herein are the sole responsibility of the author and do not necessarily reflect those of this website or its editors.