The very biggest fear among corporate elites is that Warren or Sanders could win and then use the presidency to push back against oligarchy. 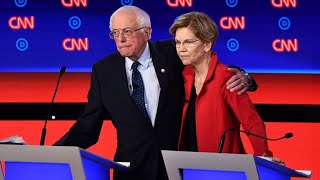 For plutocrats, this summer has gotten a bit scary. Two feared candidates are rising. Trusted candidates are under-performing. The 2020 presidential election could turn out to be a real-life horror movie: A Nightmare on Wall Street.

But seven months later, those "appealing nominees" don't seem appealing to a lot of voters. Biden's front-runner status is looking shaky, while other Wall Street favorites no longer inspire investor confidence: Harris is stuck in single digits, Booker is several points below her, and Gillibrand just dropped out of the race.

"Bankers' biggest fear" is that "the nomination goes to an anti-Wall Street crusader" like Warren or Sanders, Politico reported, quoting the CEO of a "giant bank" who said: "It can't be Warren and it can't be Sanders. It has to be someone centrist and someone who can win."

But the very biggest fear among corporate elites is that Warren or Sanders could win and then use the presidency to push back against oligarchy. If Biden can't be propped up, there's no candidate looking strong enough to stop them.

Biden's distinguished record of servicing corporate America spans five decades. He is eager to continue that work from the Oval Office, but can he get there? A week ago, a Times headline noted reasons for doubt: "Joe Biden's Poll Numbers Mask an Enthusiasm Challenge." Enthusiasm for Biden has been high among Democratic-aligned elites, but not among Democratic-aligned voters.

Even though he has inspired media onslaughts -- such as the now-notorious 16 anti-Sanders articles published by the Washington Post in a pivotal 16-hour period during the 2016 primary contest -- the Sanders campaign is so enormous that even overtly hostile outlets must give him some space. In an op-ed piece he wrote that the Post published seven weeks ago, Sanders confronted Biden's wealth-fondling approach.

Under the headline "The Straightest Path to Racial Equality Is Through the One Percent," Sanders quoted a statement from Biden: "I don't think 500 billionaires are the reason why we're in trouble." Sanders responded, "I respectfully disagree"and he went on to say: "It is my view that any presidential candidate who claims to believe that black lives matter has to take on the institutions that have continually exploited black lives."

Such insight about systemic exploitation is sacrilege to the secular faith of wealth accumulation that touts reaching billionaire status as a kind of divine ascension. Yet Sanders boldly challenges that kind of hollowness, shedding a fierce light on realities of corporate capitalism.

Related Topic(s): 2020 Elections; Polls; Sanders-Bernard; Wall Street; Warren-Elizabeth, Add Tags
Add to My Group(s)
Go To Commenting
The views expressed herein are the sole responsibility of the author and do not necessarily reflect those of this website or its editors.