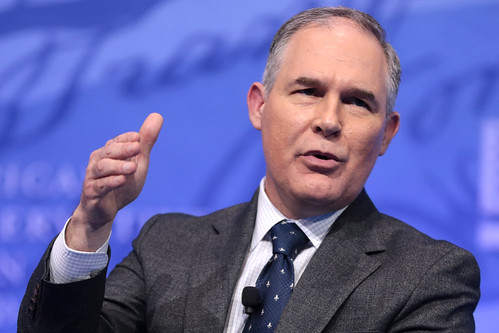 If the public rollout of the Trump administration's new EPA administrator, Scott Pruitt, is any indication, the Earth's climate will suffer even greater, irreversible damage during the next four years. And the corporate media's coverage of it may only make it worse.

For example, in one of his first public appearances, on CNBC's morning show (Squawk Box, 3/9/17), Pruitt set an ominous precedent for the Trump administration's climate change policy by outright lying. In response to host Joe Kernan's question about the role of human-generated carbon dioxide in warming the planet, Pruitt responded:

"I think that measuring with precision human activity on the climate is something very challenging to do and there's tremendous disagreement about the degree of impact, so no, I would not agree that it's a primary contributor to the global warming that we see."

Pruitt's comments are, by now, recognized as among the standard rhetorical tools of climate deniers (Guardian, 9/15/13). He boldly mischaracterizes as "tremendous disagreement" what is, in fact, an overwhelming scientific consensus about the link between humanity's greenhouse gases and global warming. Then he disingenuously calls for more "debate" and "analysis" of the topic, while at the same time the Trump administration is proposing massive budget cuts of the federal agencies that would conduct this research and analysis.

That this White House would embrace climate change denial, of course, comes as no surprise. The current president has a well-documented history of promoting right-wing conspiracy theories about climate change, calling it on numerous occasions an "expensive hoax" that was "created by the Chinese." During the 2016 campaign, Trump told a right-wing radio host, "I'm not a big believer in man-made climate change," promising to abandon the landmark Paris Agreement on climate action President Obama signed in 2016. During the first presidential debate, Trump did deny having ever called climate change a hoax, but the public record obviously proves otherwise.

Pruitt, a dogged opponent of the EPA while Oklahoma attorney general, is cut from the same climate denial cloth, minus the outrageous tweets. A trove of 6,000 emails released via court order by an Oklahoma judge last month (New York Times, 2/22/17) revealed that Pruitt had colluded for years with oil and gas companies, as well as the Koch brothers' political arm, to lobby against EPA greenhouse gas regulations. He even secretly used drafts of oil company talking points in his correspondence to the federal government.

Nevertheless, the selection in December of a hard-right climate denier like Pruitt to run the agency upset a phony media narrative that had begun just a few weeks after the election. Thanks to a few casual comments by Trump to the Times editorial staff in November, much of the pundit class had convinced itself that the new president was pivoting to a more moderate position. The prospect of four more years of this same media credulity and deference to power does not bode well for future climate change coverage.

CNBC's Kernan, in his interview with Pruitt, provided a sneak preview of what this next four years of media obsequiousness may look like. Not satisfied with merely letting Pruitt lie unchallenged, Kernan felt compelled to back him up. "That's the whole point of science, is to keep asking questions," Kernan disingenuously added in his wrap-up. "I don't want to be called a denier, it scares me. It's a terrible thing. Administrator Pruitt, I know you don't want to be called it either." Before throwing the segment back to a studio host, Kernan didn't give time for Pruitt to agree. Then again, why even bother?

To be fair, CNBC is not a cable TV network known for its trenchant climate change reporting. And one can safely assume that Pruitt's climate change denials on Fox News will be met with a "fair and balanced" tongue bath likely to put Kernan's to shame. But subtle changes in so-called straight reporting and coverage matter too. That's why the online story (3/9/17) accompanying Kernan's interview is a better, more ominous barometer of how the corporate media might respond to the Trump administration's climate policy.

Overall, the CNBC article, by energy reporter Tom DiChristopher, sanded off almost all of Kernan's overt sycophancy. However, the story still trafficked in classic false equivalence. When comparing Pruitt's evidence-free claims to the vast amount of climate data and overwhelming scientific consensus supporting anthropogenic climate change, CNBC notably chose to characterize the latter as merely "the opinion" of NASA and NOAA: "Pruitt's view is also at odds with the opinion of NASA and the National Oceanic and Atmospheric Administration."

Recent history offers numerous examples of the corporate media succumbing to the temptation of parroting White House talking points, no matter how disconnected from reality. Recall that, for years, major news organizations, including the New York Times, felt compelled to echo the Bush administration's "enhanced interrogation" euphemisms for what had previously been recognized as acts of torture (Extra!, 5--6/08). Now that climate denialism has become de facto US policy, it will become almost impossible for journalists to both maintain traditional "objectivity" while also reporting scientific reality to the public. They have a clear choice to make.

As the long indictment of flawed climate change coverage by Robert Eshelman (CJR, 5/1/14) can attest, corporate media have not always chosen wisely. Time and again, it has demonstrated that it can be successfully gamed by denialists operating little more than a propaganda campaign. Asks Eshelman in his insightful essay:

Related Topic(s): Climate Change Deniers; Climate Crisis; Corporate Eco-destruction; EPA Failure; Media Bias, Add Tags
Add to My Group(s)
Go To Commenting
The views expressed herein are the sole responsibility of the author and do not necessarily reflect those of this website or its editors.