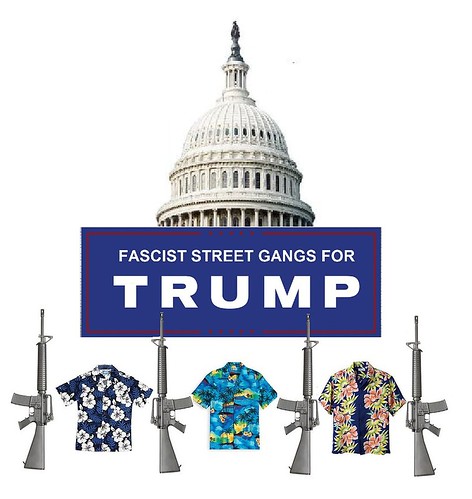 Trump Turns MAGA Mobs Loose on Congress
(Image by Mike Licht, NotionsCapital.com)   Details   DMCA
The Senate of the United States has just refused to hold former President Trump responsible for inciting an insurrectionary mob to attack Congress even though he did so in full view of television cameras. In an ominous victory for authoritarianism, the legislative branch has willingly submitted to a violent assault by the executive branch.

As he campaigned for re-election, Trump constantly warned that the election would be a fraud, as in this July 30 tweet: "2020 will be the most INACCURATE & FRAUDULENT Election in history." On Aug. 18, 2020, Trump told a rally in Oshkosh, Wisconsin that "the only way we're going to lose this election is if the election is rigged." Trump made it perfectly clear that he would not accept an election loss, thereby rejecting the very idea of democracy. If he were expecting to win the vote, all his talk about fraud and rigging would be fouling his own nest. But he expected to lose. He was not campaigning to win the vote, but instead to get his base to believe that Biden's winning vote count would be rigged.

In case we had missed the point of his campaign rants, between Election Day on Nov. 3 and the Capitol riot on Jan. 6 Trump "lied that the election was rigged at least 68 times and that it was stolen or in the process of being stolen at least 35 times. He made claims of voter fraud and ballot-counting irregularities more than 250 times" (Huffpost 2/8). He repeatedly said he had won in a "landslide."

On Dec. 19 Trump tweeted: "Big protest in D.C. on January 6th. Be there, will be wild!" And wild it was. Early in the Senate impeachment trial (Feb. 8-9), the House presenters showed video of Trump haranguing thousands of his supporters whom he had invited to gather near the White House on Jan. 6. He began by reminding them that "All of us here today do not want to see our election victory stolen by emboldened radical-left Democrats, which is what they're doing." He urged them to march to the Capitol to "stop the steal."

They tried to do his bidding. We have all seen videos of hours of violence and destruction by the MAGA mob. The House presenters skillfully knit together the video evidence recorded by many cameras at the scene. Five people were killed, including a police officer struck by a fire extinguisher. The horror of the violence resulted in two police suicides shortly after the riot.

Trump watched the riot on TV, refusing Kevin McCarthy's plea to call for a halt to the mayhem. Vice President Pence and his family were in the Capitol building and had to be rushed to shelter by police. Trump never expressed concern. Instead, he tweeted that "Mike Pence didn't have the courage to do what should have been done," namely to obstruct the certification of the electors' votes. This tweet would have further inflamed a mob that had been shouting "Hang Mike Pence" and had erected a noose for him outside the building.

In word and behavior, many GOP senators showed their indifference to the powerful and emotional presentation by the House managers. As reported by Insider, Lindsey Graham said he thought "most Republicans found the presentation by the House Managers offensive and absurd." Josh Hawley sat in the gallery with feet up, reading. A maskless Rand Paul doodled. Ted Cruz said, "The result of this trial is preordained. President Trump will be acquitted. I think the trial is a waste of time and is the result of seething partisan anger on the part of congressional Democrats."

Both the Democratic and Republican parties are to blame for the corruption and decay of American government. But the GOP has played a special role. Since President Obama took office, Mitch McConnell has steered his party into a largely obstructionist role, standing for nothing but re-election. When he became Senate Majority Leader in 2010, he said: "The single most important thing we want to achieve is for President Obama to be a one-term president." He has used the filibuster relentlessly to block bills and nominees supported by the Democratic Party. He has made the Senate dysfunctional. Unless Democrats can finally adopt the "nuclear option" of ending the filibuster, the future is bleak.

Noam Chomsky has several times described the Republican Party as "the most dangerous organization in world history" for its refusal even to acknowledge the looming catastrophe of global warming. Under Trump, the U.S. lost four years during which it could have done so much to mitigate the climate crisis. In fact, Trump did his best to add to the danger.

The GOP has crippled our government at a time when the wealth, resources and talent of the largest economy in the world could have been devoted to urgent critical needs at home and abroad. If the U.S. remains a failed state, we may also have a failed planet.