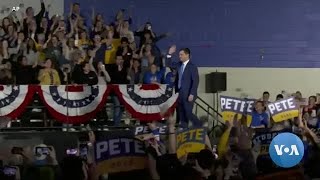 The Iowa Democratic Party has refused to release results of the caucuses held throughout the state on Monday night to determine the allocation of delegates for the party's presidential nomination. Officials are now saying that they hope to have results "some time Tuesday."

The action is an unprecedented intervention by the party apparatus into the process of choosing the party's presidential nominee. It is clearly directed at the campaign of Vermont Senator Bernie Sanders, who was leading in the polls and was expected to place first in a four- or five-way contest in Iowa.

The media and non-Sanders Democratic Party candidates quickly developed a common line, citing supposed "quality control" issues in the vote that questioned its "legitimacy." The New York Times, which earlier posted polling results that clearly showed Sanders in the lead, removed all such figures from its front page by midnight.

An official statement from the Iowa Democratic Party claimed that there were "inconsistencies in the reporting of three sets of results" from each of the more than 1,700 precinct caucuses held across the state. The party statement did not explain the nature of the discrepancies or how they were to be remedied, except to claim that the issue was not the result of a hack or other external interference with the tabulation of the vote.

Lawyers for the campaign of former Vice President Joe Biden sent a letter to the Iowa Democratic Party Monday night demanding an accounting of the method being used for "quality control" in the vote tabulation before any results are released. This could keep the results of the caucus voting secret for days, if not weeks, while courtroom battles are played out, in a manner reminiscent of the 2000 vote in Florida.

Precincts covered by the major media Monday night reported that Biden suffered a debacle, often not even receiving enough support to pass into the second round of voting.

The manipulation of the results in Iowa is clearly directed from the top. The Democratic National Committee sent dozens of top operatives, including software and cybersecurity experts, into Iowa in the weeks before the caucuses. Even before Monday, there were efforts to develop the line that the vote might not be legitimate.

In fact, the software application used to report the results from precinct caucuses -- three sets of numbers for less than a dozen candidates -- would not have been very complex, and there was ample time for testing and security measures.

The weeks leading up to the Iowa caucuses featured a coordinated campaign by the corporate media and the Democratic Party establishment to undermine Sanders' support. This campaign was widely viewed as unsuccessful or even counterproductive -- boosting support for the self-described "democratic socialist" rather than reducing it.

The failure to report results from the caucus raises new questions about Saturday's decision to cancel the release of the final Iowa Poll by the Des Moines Register, allegedly because of a complaint by the Buttigieg campaign that at least one telephone survey worker did not include the name of their candidate. The poll was expected to confirm Sanders' standing as the leading candidate, only two days before the caucuses.

All the major Democratic candidates made speeches Monday night thanking their supporters and pledging to continue their campaigns in the New Hampshire primary February 11. Significantly, however, Buttigieg was the only one to claim he had been "victorious" in the caucuses, an assertion that had no basis in any figures reported from the state, since there were none.

Data from entrance polls reported on cable television suggested that Sanders was in the lead with at least 23 percent, followed by Buttigieg, Warren and Biden, in fourth place with about 16 percent. Demographic information on caucus-goers also suggested such an order of finish, with the proportion of voters under 30 jumping from 18 percent in 2016, when Sanders and Hillary Clinton finished in a virtual tie, to 24 percent in 2020.

The debacle and orchestrated operation over the Iowa caucuses is only a foretaste of what is to come in the efforts by the Democratic Party to rig the primary election process.

Patrick Martin writes for the World Socialist Website (wsws.org), a forum for socialist ideas & analysis & published by the International Committee of the Fourth International (ICFI).
Related Topic(s): Democratic Cowards; Iowa Caucus; Party Politics Democratic; Polls; Sanders-Bernard; Voting, Add Tags
Add to My Group(s)
Go To Commenting
The views expressed herein are the sole responsibility of the author and do not necessarily reflect those of this website or its editors.