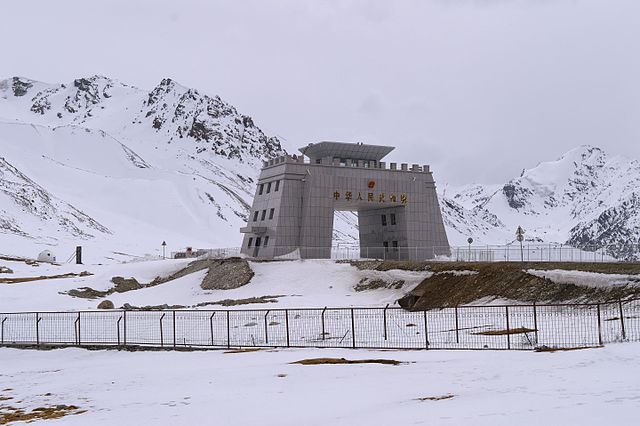 The month of March that straddles winter and spring and tends to display characteristics of both, has brought no cheer to China.

The Muslim majority southern Xinjiang Uyghur Autonomous Region has become unusually restive. And Xinhua admits frankly that the southern Xinjiang is "terror-plagued". The Chinese media has moved into an overdrive in matters of Islam and Muslims. Dragon's disquiet is understandable.

Guns, drugs and terrorist media are being continuously smuggled into the area from Pakistan through the Khunjerab Pass border post, which was opened in 1982. From snow covered boundary marker No.7 at Khunjerab Pass, one can see Pakistan stretching beyond the horizon.

The narcotics producer is Afghanistan. But refining and packaging takes place in Peshawar, the gate-way to Pakistan's Taliban infested tribal land that borders Afghanistan.

From Khunjerab Pass, the drugs make their clandestine way to Kashgar city and then travel to Guangzhou in South China's Guangdong Province. The Af-Pak heroin is more than ninety percent pure, and has ready buyers all over the Chinese mainland and beyond.

Islamist militant groups control the narcotics and arms trade in Pakistan. Most of them are the proxies of the military establishment led by the GHQ Shura and further its strategic and security agenda.

Their gaze was initially India centric and Afghan fixed. Not any longer. It has been encompassing Middle East, and Far East these days. Also the "Communist Satan" thanks to Uyghur separatists' claim that southern Xinjiang is the Second East Turkestan Republic and that it was illegally incorporated into the People's Republic of China in 1949.

The present phase of Islamist militant resurgence in Pakistan (also across the globe) has coincided with the integration of Uyghur militants into global networks, which are mostly Af-Pak based.

A manifestation of this development, as Australian Chinese expert, Dr. Michael Clarke, (his 2011 book, 'Xinjiang and China's Rise in Central Asia -- A History', is a must read for all Sinologists), points out, is the attack on the Chinese embassy on the outskirts of the Kyrgyz capital, Bishkek,on Aug 30, 2016.

According to the Kyrgyz State National Security Committee, the suicide bomber was a Uyghur and "a member of the Eastern Turkestan Islamic Movement" (ETIM).Another suspect was an ethnic Uzbek, Izzotillo Mashrapovich Sattybayev, who "underwent training in Syria in carrying out acts of terrorism and sabotage."

Many Chinese 'in-house'egg-heads, notably, Li Wei (an anti-terrorism expert at the China Institutes of Contemporary International Relations), have also put the blame for the Bishkek attack at the door-step of Uyghur militants.

Put simply, they have spiked China's official assertion, articulated by Global Times,that Beijing is simply being "dragged into international disputes as its global footprint grows".

The drugs- arms syndicates' trade in Pakistan enjoys a security blanket at home. There is no secret about it.

The Chinese leadership knows this truism from the first-hand accounts provided by the Chinese companies working in Pakistan for the past several decades. Some of these companies are victims of kidnappings for ransom or ambush as the price for their exuberance.

A blogger since July 2008 James Duglous Crickton is a London based consultant working with a consultancy firm focusing on Asia, particularly South Asia and East Asia. Political Research is his functional focus area. While his interests are (more...)
Related Topic(s): Ambush; Bail-out; Drugs; Guns; Islam; Islamist; Militancy; Militants; Military; Muslim; (more...) Ransom; Security; Taliban; Trade; Xinjiang, Add Tags  (less...)
Add to My Group(s)
Go To Commenting
The views expressed herein are the sole responsibility of the author and do not necessarily reflect those of this website or its editors.