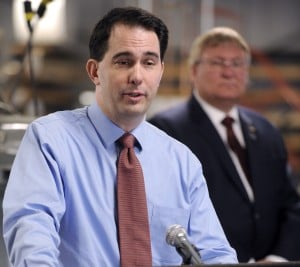 
Driving west from Madison, through the small towns and dairy farm country of western Wisconsin, it quickly becomes clear that the Wisconsin recall election is a statewide phenomenon.

For all the efforts of Gov. Scott Walker to convince the hosts on Fox and CNBC that he is a popular governor who is threatened not by angry citizens but by "the left, the radical left, and the big labor union bosses" who are "somehow counting on the idea that they can bring enough money and enough bodies into Wisconsin to dissuade voters," the message from farm country tells an entirely different story.

Walker has had the overwhelming spending advantage since the recall fight started last November. Walker has had all the benefits of the Republican Party organization, which has gone into overdrive to aid his candidacy, while Democrats have faced a multi-candidate primary fight.

Yet Walker does not have the swing counties of western Wisconsin wrapped up. Not by a long shot.

Of course, the governor also has his supporters.

But there is genuine, broad-based and statewide opposition to this governor in every region of Wisconsin -- especially in the western and northern parts of the state. Even as he has spent $21 million so far on the recall campaign, that opposition is growing.

In the new Marquette University Law School Poll, disapproval of the governor's performance had moved up to 51 percent. Indeed, his approval rating has now declined to 47 percent, the lowest point so far this year. And one of the prospective Democratic challengers, Tom Barrett, has now moved ahead of Walker in head-to-head matchups run by the Marquette pollsters.

What has changed? The polling shows that Wisconsinites, who once felt that Republicans had the right equation for creating jobs (tax cuts for multinational corporations, attacks on public employees and their unions, slashing of education and public service funding), have soured on the GOP and its poster-boy governor. They've been influenced, of course, by the Bureau of Labor Statistics study showing that, in the year since Walker implemented his austerity agenda, Wisconsin has suffered the worst job losses in the nation. The Marquette poll shows that Wisconsinites now believe that investments in education, good relations with unions, and fair tax policies are more likely to grow the economy than Walker's "war on workers" approach.

The governor admitted Wednesday that the recall contest on June 5 is "a 50-50 race." But what's notable is that his numbers are declining, while numbers for the opposition are rising.

When I spoke at the Arcadia Bookstore in Spring Green the other night, we talked a good deal about the Democratic gubernatorial primary. I suggested, as I will here, that people should take their vote seriously. After all, they are not just choosing a nominee. If the signs in front of the farms are correct, and if the polls are correct, it looks like Democrats may be choosing a governor.

Related Topic(s): Democratic; Governor Scott Walker; Jobs; Republican; Wisconsin Recall Elections, Add Tags
Add to My Group(s)
Go To Commenting
The views expressed herein are the sole responsibility of the author and do not necessarily reflect those of this website or its editors.