People turn their heads and quickly look away. Like a newborn baby it just happens ev'ryday.-- Mick Jagger, Paint it Black

Another vicious and senseless shooting, this time in Wisconsin. A crazy man entered a Sikh temple and starting killing people with a semi-automatic weapon. This comes close on the heels of the July 20th Aurora, Colorado movie theater massacre. And the Aurora shooting followed the April 2nd slaughter of seven people at a college in Oakland, California by a crazed former student. On February 7, a student shot three and injured six more at an Ohio high school before being stopped. Oh, wait--I've skipped over the May 20th shooting in a Seattle cafe' (three dead and two wounded in the cafe', and one more shot dead while the shooter was on the loose ).

The list goes on and on. We don't even hear about the smaller massacres anymore.

In the wake of the Wisconsin murders, one of CNN's talking heads suggested the Sikh community take this opportunity (yes, the twit really did call that appalling carnage as an opportunity) to educate the world about their faith. The only thing lacking from this breathlessly tasteless comment was the teachable moment metaphor.

And our politicians? Useless. Utterly useless. If Romney or Obama utter one more platitude about tragedy and loss and overcoming sorrow, I'll throw up. Platitudes are cheap to toss around. Do something!

A friend of mine, Susan, a doctor who spent years in South Africa providing healthcare to women and children, despises the men of South Africa. She sputters with disgust as she describes their  reckless spreading of HIV to the women in their lives. People are dying like flies from HIV, but the culturally accepted norms--polygamy and male promiscuity--are still attuned to the 1800's. Susan is furious that these men don't understand that the real world around them has changed, and that they must change their behavior in order to survive. It occurred to me that the South Africans have stalled at a cultural blind spot. The age-old practices are killing them, but people keep on keepin' on as if it were 1812 instead of 2012. Hello! Is anybody in there?

And doesn't that apply to the United States? Haven't we stalled at a long-standing assumption about guns? I'm sure that wholesale slaughter is not what the founding fathers had in mind when they spoke of bearing arms. 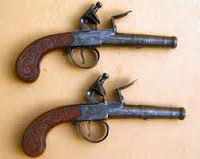 Revolutionary War weapons by google images Most of the shooters seem to be mentally disturbed and yet the NRA is still insisting on the untouchable perfection and clarity of the Second Amendment. Having guns for hunting--and even for self defense--is one thing. But making weapons that were clearly intended for battlefields and wars accessible to un-medicated schizophrenics is quite another. The NRA and gun activists would better represent their cause by joining forces with gun control advocates to solve this one, obvious problem: how to keep weapons out of the hands of the clearly dangerous and delusional. Surely this is something we can all agree on. The NRA would be enhancing its own reputation as a responsible organization leading the movement to curb excesses and dangers inherent in its sport. And the gun control lobby would be thrilled to have a working partner in its concerns.  Hello! Is anybody in there?

Corporate professional and business writer, Phyllis Doloff's commentary can be found on her blog, Purl Onions, at http://purlonions.blogspot.com/.
Related Topic(s): CNN; Killing; NRA; OPPORTUNITY; OPPORTUNITY; Slaughter, Add Tags
Add to My Group(s)
Go To Commenting
The views expressed herein are the sole responsibility of the author and do not necessarily reflect those of this website or its editors.