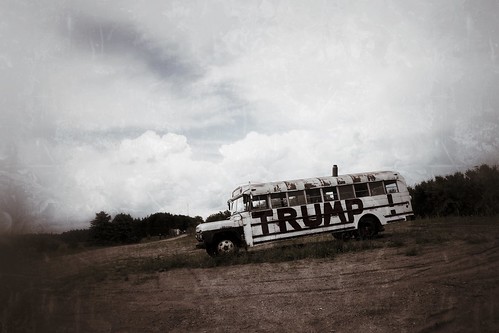 You're either on the bus...or you're sane: Trump bus, Northern Minnesota
(Image by Lorie Shaull)   Details   DMCA

Wilmer was the great, great, great, Grandson of Wilmer Mclean, the Virginian whose house was on the battlefield of the first battle of the Civil War and, having moved, his new home was also where Lee surrendered to Grant. The original Wilmer had a front row seat to the consequences of stupidity.

Old Wilmer was a somewhat sour, stoic fellow. When the Appomattox Daily News asked him his thoughts on the war he responded, "It was a goddamned shame." Thereafter the McLean family prided itself on being realists and straight shooters. The contemporary Wilmer had argyle socks made that had "It was a goddamned shame" sewn into them. The original Wilmer's wife, although somewhat frail, was not one to harbor delusions. After the signing of the surrender in her parlor, the assembled Yankee Officers and staff proceeded to cut off pieces of upholstery and the caning from chairs with their pin knives as souvenirs of the momentous occasion. Sitting quietly on the stairs she was heard to whisper, "a**holes..." From "Wilmer's Socks" By Franklin Cincinnatus