The notorious military contractor has a history of spreading disinformation. 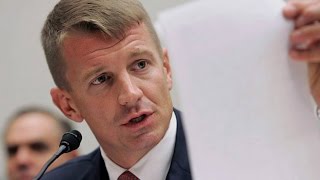 When Erik Prince, the founder of the notorious Blackwater security firm, heads into a private meeting with staffers and members of the House Intelligence Committee on Thursday, the No. 1 topic will be a secret trip he made in January to the Seychelles islands to huddle with a Russian close to Vladimir Putin. According to the Washington Post, the rendezvous was arranged by the United Arab Emirates, where Prince moved in 2010 and formed a mercenary army for the regime, and this get-together was part of an attempt to set up a back-channel communication between Putin and Donald Trump, then the president-elect. The visit has drawn the attention of the FBI, which has been investigating contacts between Trump associates and Russia, but a Prince spokesman last April claimed the "the meeting had nothing to do with President Trump."

There is much congressional investigators can ask Prince about. He has had a long, controversial career buckraking in the dark corners of the national security world. The brother of Betsy DeVos, Trump's education secretary, Prince has been an avid cheerleader for Trump (donating $250,000 to help elect him), an informal post-election adviser for Trump, and a pal of Stephen Bannon. Jared Kushner, Trump's son-in-law, and Bannon recruited Prince earlier this year to draft a plan that would replace US troops in Afghanistan with for-profit mercenaries -- supplied, of course, by a military contractor like Prince. (The Pentagon said no thank you.) But perhaps the most important thing for Intelligence Committee members and staffers to keep in mind, as they try to pry information from Prince, is this: Prince is a fabricator.

During the election, the usually media-averse ex-Navy SEAL was a regular contributor to Breitbart News, the Bannon-backed far-right outlet, defending Trump and promoting conspiratorial swill.

David Corn is  Mother Jones ' Washington bureau chief. For more of his stories,  click here . He's also  on  Twitter  and  Facebook .  RSS  |  TWITTER  David is (more...)
Related Topic(s): Blackwater; Erik Prince; Meeting; Mercenaries; Mercenary; Vladimir Putin, Add Tags
Add to My Group(s)
Go To Commenting
The views expressed herein are the sole responsibility of the author and do not necessarily reflect those of this website or its editors.