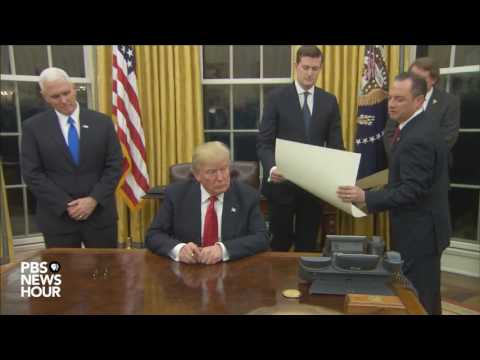 If a good president, with integrity can be put in the Whitehouse, then there may be something good Trump has done.

I have very mixed feelings about this, but here goes.

Trump has pushed for more executive power than perhaps any previous president. He has fought for and strived to have the power to issue directives and policies, cancel laws and treaties.

Trump has used these expanded powers in despicable ways. But he has also set up the next president to be in a position to have similar powers. If a neoliberal, DNC favorite is elected, we can assume that he or she will be an impotent do-nothing. But if a real progressive gets in, it's possible that he (Bernie) or she (Tulsi or Marianne) will be able to use those powers. That will be great because Democrats in the House and Senate have proven themselves to be pathetically weak and incompetent, even when the Democrats held the House, Senate and White House.

I want to know that if a Democrat is elected president he or she WILL use those powers, if they have them.. And I want to know how they will use them. (I'd also like congress to pass legislation restricting the extremities of the presidential powers Trump has used.)

For starters, the president elect should hit the ground running, identifying every order Trump has given, not just executive directives, every single order to every agency, department and person. That should happen so on day one of the presidency, in 2021, the new president can cancel literally hundreds of Trump orders.

In addition, the new president, on the first day, should have a collection of at least 100 executive orders, and a team of lawyers ready to defend them.

re-activate the US's participation in the Paris climate treaty

replacing William Barr on day one. Trump became master of the temporary appointment. No need to wait for senate confirmation. Use a temp.

stop the concentration camp and child separation policies at the border. Reconnect families.

get reports of all investigations of individuals and groups Trump ordered, looking for abuse of power

This is a tiny fraction of a list of potentially hundreds of orders that should be put into motion on day one.

Every Democratic candidate should tell us their plans along these lines, identifying the specific orders and steps they'll be taking-- not all of them but they should, at least, give us an idea of what they are thinking of.

Related Topic(s): Executive Power Expansion, Add Tags
Add to My Group(s)
Go To Commenting
The views expressed herein are the sole responsibility of the author and do not necessarily reflect those of this website or its editors.