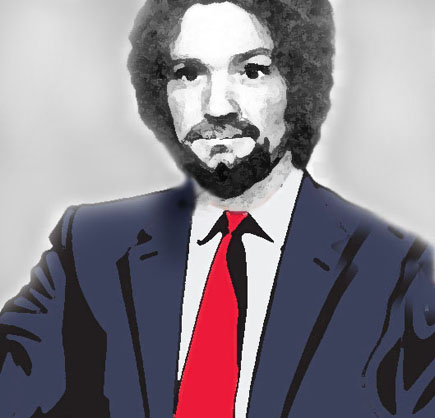 Now that Donald Trump is out of office, it's no surpriseespecially to Republicansthat Democrats are out for revenge. Speaker of the House Nancy Pelosi wants Trump tried for murder. So does California Congresswoman Maxine Waters. So does everyone else I know who voted against him. Unfortunately, wanting it to happen and making it happen are two different things.

Let's examine the facts and see where they lead. First, a little history. We all remember the Charles Manson case and how he was found guilty of murder and spent the rest of his life in prison. But if you'll recall, Manson himself never killed anyone, and he maintained until the very end that he never ordered his followers to kill anyone.

Vincent Bugliosi, the LA County Deputy DA that prosecuted the case, used the "joint responsibility rule of conspiracy" to convince the jury of Manson's guilt: "The law is clear then that once a conspiracy is formed, each member of the conspiracy is criminally responsible for and equally guilty of crimes committed by his coconspirators which were in furtherance of the object of the conspiracy."

In addition, several of the Manson family went to prison for their crimes, including murder. As of this writing, over 300 Trump followers have been arrested and await charges that could include sedition and assault. Also, the FBI has identified the assailant of Capitol Police Officer Brian D.Sicknick. They haven't released his/her name yet, but when they do, this person will be charged with homicide. Whether it will be first degree or second degree murder will depend on the circumstances.

So follow the logic. If a majority of the Senate, including seven Republicans, found Trump guilty of inciting an insurrection during his impeachment trial, then it follows that a jury of his peers could also find Trump guilty using the joint responsibility rule of conspiracy for the murder of Officer Sicknick. By the way, this would also apply to anyone who was part of the planning on the assault of the Capitol, including congressional Republicans.

Newly-nominated Attorney General Merrick Garland has stated that he will focus not only on those who participated in the Capitol riot, but also those "upstream" of the crime. Will this lead him specifically to Trump? So far, several of Trump's followers are playing the old "I was just following orders" defense, saying they were only doing what Trump wanted them to do. Are they telling the truth? Did they really believe the former president wanted them to break into the Capitol, assault the police, hunt down Nancy Pelosi and Mike Pence and have a "wild" time?

"You have to understand the cult mentality," Clint Broden, attorney for accused Capitol rioter Garrett Miller, said. "They prey on vulnerable victims and give them a sense of purpose. In this case, Trump convinced his cult followers that they were working to preserve democracy." Notice the use of the words "cult mentality" and "cult followers." Sound a little like the Manson case?

Of course, Trump defenders say that he was just following his First Amendment rights when he used incendiary language to encourage them to walk down to the Capitol and "fight". In addition, they say that he was using the word figuratively, as a metaphor, that he did not mean it literally.

"The people Trump despises most love him the most," Howard Stern has said. In other words, Trump's followers are the "losers" and "suckers" that Trump has been conning for years, even before he became president, only they're too brainwashed to realize it.

As Manson once remarked:

John F. Miglio is a freelance writer and the author of Sunshine Assassins, a dystopian political thriller. His articles have been published in a variety of periodicals, including Los Angeles Magazine and LA Weekly. His most recent articles (more...)

Did Donald Trump Pay to Have His Research Papers Written for Him in College?

The Conspiracy Against Renewable Energy

The Nexus between Pantheism, Quantum Physics and the Collective Unconscious

Time to Tax Super Rich and Corporations at 1950s Levels