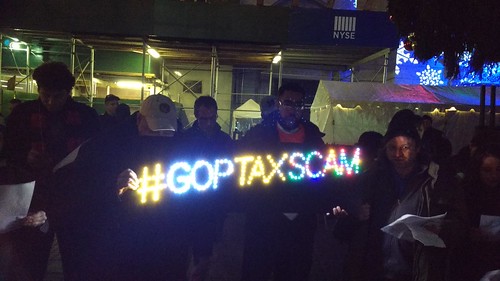 The countries of the world that have the most stable economies and that suffer from the smallest boom and bust cycles are the countries with the highest tax rates on the very, very wealthy. The reason for that is that the government is functioning essentially as a stabilizer, so capitalist economies, there's just a fundamental truth about them. This is not a knock on capitalism, it's just the way it is.

And so when those depressions and recessions happen, a government that is well-funded -- in other words it has a broad enough and high enough tax base that the government has resources -- that government can spend money into the recession. They could build new roads, they can do new construction projects, they can build new sewer systems, they can build out high-speed Internet infrastructure.

Whatever it may be, that government can spend or for that matter they can in an extreme case like in the Republican Great Depression, what Franklin Roosevelt did was he even hired people to do basically scutwork -- to plant trees, to sweep streets -- literally. The WPA was hiring people to paint murals, hired poets to write poetry and do public readings. Not that that's scutwork, but it's not the kind of thing that traditionally you think of as government functions.

The reason our government was doing that was because capitalism was in one of its cyclical failures, one of its cyclical crash modes. And government at that point needs to step in and stimulate the economy by putting as much money as possible at the bottom of the economy into the pockets of working people, which is exactly what FDR did, and it's how we got out of the Great Depression, between that and World War Two, which was the largest government stimulus in the history of the United States.

Wars are stimulative. It's not a good way to stimulate the economy because it's not long-term. If you build a hospital it stimulates the economy and continues for the next 50 years as a great revenue source and healing source. You build a bomb and it might cost the same as the hospital, but once you drop that bomb it's gone. The money is gone and the bomb is gone.

So anyhow these cycles of boom and bust are best handled by nations like the Scandinavian countries, the northern European countries. Germany during the Great Crash of 2008/2009, one of the biggest institutions in Germany that got hit was Deutsche Bank but it was mostly because they were loaning and they were gambling on American derivatives in the American housing market.

Top tax rates over 50 percent stabilize the economy. They reduce the impact of recessions. And sure enough, in 1921 Warren Harding ran on a campaign of dropping the top tax rate on the richest in America from 91% down to 25%. He won the election and he dropped the top tax rate.

And what did it do? It started a bubble. It kicked off what we refer to as the roaring 20s, which was pure bubble fueled by rich people. It was a speculative stock and real estate bubble and that bubble burst. It started bursting in Florida in early 1928 and by the end of 1929 that property bubble had reached all the way to New York City and it took down the stock market.

Now the crash didn't last more than a few days -- the really severe part of it -- and the consequences of it, it was about a year long pain. But it wasn't just the crash.

Related Topic(s): Debt; Democrats; Depression; Economy; Election; Republican, Add Tags
Add to My Group(s)
Go To Commenting
The views expressed herein are the sole responsibility of the author and do not necessarily reflect those of this website or its editors.