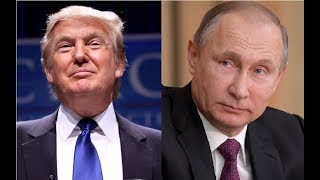 "In keeping silent about evil, in burying it so deep within us that no sign of it appears on the surface, we are implanting it, and it will rise up a thousand fold in the future. When we neither punish nor reproach evildoers, we are not simply protecting their trivial old age, we are thereby ripping the foundations of justice from beneath new generations." -- Aleksandr I. Solzhenitsyn

The American people do not realize the seriousness of the Russiagate conspiracy against them and President Trump. Polls indicate that a large majority of the public do not believe that Trump conspired with Putin to steal the presidential election, and are tired of hearing the media prostitutes repeat the absurd story day after day. On its face, the story makes no sense whatsoever. Moreover, the leaked emails are real, not fabricated. The emails show exactly what Hillary and the DNC did. The public knows that these transgressions were pushed out of news sight by the false story of a Trump/Putin conspiracy.

The fact that the entirety of the US print and TV media served in a highly partisan political way to bury a true and disturbing story with a fake news story -- Russiagate -- is one reason some polls show that only 6% of Americans trust the mainstream media. All polls show that large majorities of independents, Republicans, and youth distrust the mainstream media. In some polls about half of Democrats trust the media, and that is because the media is servant to Democratic Party interests.

Russiagate is a dagger aimed at the heart of American governmental institutions. A conspiracy involving top officials of the Obama Department of Justice, FBI, and other "security" agencies was formed together with Hillary Clinton and the Democratic National Committee, the purpose of which was to defeat Trump in the presidential election and, failing that, to remove Trump from office or to discredit him to the point that he would be reduced to a mere figurehead. This conspiracy has the full backing of the entirely of the mainstream media.

In other words, it was a coup not only against Donald Trump but also against American democracy and the outcome of a presidential election.

There is no doubt whatsoever about this. The facts are publicly available in the declassified Top Secret Memorandum Opinion and Order of the FISA Court -- and in the declassified report from the House Intelligence Committee -- given by the presstitutes the misleading name of the "Nunes Memo," as if it is Nunes' personal opinion and not the findings of months of work by an oversight committee of Congress.

All of this information has been posted on my website for some time. If you have difficulty following my explanation, former US Attorney Joe DiGenova explains the felony actions by the FBI and Obama Justice (sic) Department here.

Briefly, the National Security Agency discovered that the FBI and DOJ were abusing the surveillance system. As a favor of one security agency to another, NSA Director Adm. Rogers permitted the FBI and DOJ to rush to the FISA Court and confess their transgressions before the NSA informed the Court. The FBI and DOJ pretended that their deception of the Court in order to obtain surveillance warrants for highly partisan political purposes was not due to their intent but to procedural mistakes. The FBI and DOJ told the Court that they were tightening up procedures so that this would not happen again. The FISA Court Memorandum and Order clearly states:

"On October 24, 2016, the government orally apprised the Court of significant non-compliance with the NSA's minimization procedures involving queries of data acquired under Section 702 using U.S. person identifiers. The full scope of non-compliant querying practices had not been previously disclosed to the Court."

What this legalese jargon is saying is that the FBI and DOJ confessed to obtaining warrants under false pretexts. These are felonies.

"On January 3, 2017, the government made a further submission describing its efforts to ascertain the scope and causes of those compliance problems and discussing potential solutions to them. See January 3, 2017, Supplemental Notice of Compliance Incidents Regarding the Querying of Section 701-Acquired Data ('January 3, 2017 Notice'). The Court was not satisfied that the government had sufficiently ascertained the scope of the compliance problems or developed and implemented adequate solutions for them and communicated a number of questions and concerns to the government."

In other words, the FBI and DOJ were attempting to make corrections to their "compliance problems" in ways that would allow them to continue to mislead the FISA Court, and the Court wasn't letting them.

Rep. Adam Schiff, a Democrat who is a disgrace to the voters of his California district, to the Democratic Party, and to the House of Representatives, knows full well that the FBI and DOJ deceived the FISA Court. Schiff is so partisan that he lies to the hilt in the face of hard documented evidence from both the FISA Court and his own House committee. Schiff is so totally devoid of all honesty and integrity that he is the perfect leader for a shithole country, something that he and his ilk are turning the United States into.

The honest left -- not the Identity Politics left, which is a collection of deranged idiots -- does not believe a word of the concocted Russiagate conspiracy against Trump. They object to the Russiagate conspiracy not because they like Trump, which they most certainly do not, but because they understand that it is a lie directed against truth. They understand that the American mainstream media has deserted factual, truthful reporting and serves as a propaganda ministry for the war/police state that American is becoming.

For example, Eric Zuesse holds The Atlantic and its presstitute writer, David A. Graham, to account for lying about the House Intelligence Report.

Related Topic(s): American Facism; CIA; Democracy Decay; FBI; FISA; Politics; Propaganda; Trump Dossier, Add Tags
Add to My Group(s)
Go To Commenting
The views expressed herein are the sole responsibility of the author and do not necessarily reflect those of this website or its editors.