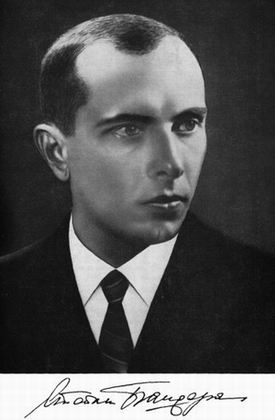 In a bizarre twist of fate, this article maybe the only warning Stepan Bandera III receives that he really needs to get a running head-start.

Part of the Ukrainian Diaspora is trying to cast the crowning achievement of his grandfather "the real Stepan Bandera" to the ash-heap of history. This move is geared to crush the hope for freedom of generations of Bandera supporters.

In an effort to co-opt Ukrainian Nationalism out from under the Bandera brand, emigre nationalist leaders are already starting to refer to Stepan Bandera as a "disgruntled Pollack with a bad sense of direction!" Questions asking if the original Stepan Bandera even visited Ukraine are now being voiced. Most importantly, Stepan Bandera's honor and commitment are being challenged by Ukrainian Diaspora leaders.

For Stepan Bandera III, Public Law 86-90 represents the pinnacle of his family history. Shown below, just like North Vietnam, Ukraine did not exist without it. The country called Ukraine only came into being in 1991.

The Bukovinians, Galicians, Russyans, ethnic Hungarians, and Romanians that make up the "Ukrainian diaspora" all have strong family ties that make up what's called the Ukrainian emigre world. After supporting Bandera for over 60 years, all have their hopes pinned on the young Bandera to fulfill his grandfathers word and free their families from Poroshenko's repressive government. The emigres are watching how the situation in West Ukraine pans out very closely.

Cast into his notorious grandfather's foot-steps like his father before him, the young Bandera III will most likely succumb to the need of a new Ukrainian hero. Since Kiev is now openly nationalist, it may be necessary to keep Ukrainian nationalism relevant in the Diaspora, and more importantly the US Congress.

Will the new and improved next generation Bandera martyr for the cause please stand up!

Keeping Stepan Bandera III's Work Behind the Scenes and Destroying it

Having grown up in Canada under the watchful eye of the Ukrainian World Congress, the youngish Stepan Bandera III learned the softer OUNm tradition of Ukrainian nationalism as well as the rigid American OUNb tradition that is shaping post Maidan Ukraine.

From the mid 1990's the US and Ukraine have been working together shaping Ukraine into something that resembles a democracy to no avail. If Ukraine wanted to achieve this at any point, who sabotaged it?

At CUSUR ( Center for US-Ukraine Relations) each step in Ukraine's progress was plotted. Economics, Military (especially NATO ascension), politics, and agriculture were all areas that measured timetables for national maturity were laid out.

This one name appears on all of the steering committees of the CUSUR. As you'll see in UA Quest Roundtable Steering Committees , that name is Stepan Bandera .

Opposing this and steering Ukraine away from Europe and NATO involvement, other than handouts you will also find perennial keynote speaker Valentin Nalyvaichenko. Nalyvaichenko shared the podium with US Congressmen, Military brass from the Pentagon and NATO, as well as department of State, and Business representatives from America's largest corporations about integrating Ukraine.

What Nalyvaichenko actually brought to the table over the past decade was the perspective and demands of Nalyvaichenko's superior in Tryzub Banderi, Dimitri Yarosh .

Related Topic(s): Idiocracy; Nationalism; Ukraine; Will Of The People Public, Add Tags
Add to My Group(s)
Go To Commenting
The views expressed herein are the sole responsibility of the author and do not necessarily reflect those of this website or its editors.