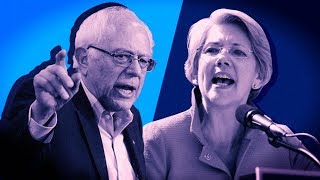 Twenty-plus candidates are officially running for the 2020 Democratic presidential nomination, but the policy is being defined by the senators from Vermont and Massachusetts. There are differences and distinctions, to be sure, but the core ideas and the tone are being established by Sanders and Warren.

Sanders and Warren have clearly defined track records, and that sets them apart. It's not just what they say they will do, or what they think would be a good idea, but what their entire body of work in public office over decades illustrates that they will and actually can do. You know what you're getting -- they've proven it.

Some of the other candidates are certainly inspiring.

California senator Kamala Harris is razor-sharp. She exudes confidence and competence. She's not going to get pushed around, period. But you do sense that she's not likely to rock the boat or interfere with longstanding relationships on which Democratic leadership depends. It's easy to imagine her moving to the right if elected.

South Bend Indiana mayor Pete Buttigieg (Mayor Pete) just makes you sigh with relief as you listen to him speak: sanity and reason in a time of unreason and insanity. But you wonder what he might do if confronted by Mitch (Darth Vader) McConnell determined to thwart and defeat him at all costs. Would he approve yet another massive increase in military spending? If he were painted by the right as "soft on defense," would he use the military in a foreign land to counter that assertion? Buttigieg is young and somewhat idealistic. You wonder if he fully grasps the utter ruthlessness that stalks the Oval Office.

Former Texas representative Beto O'Rourke, like Buttigieg, brings that fresh energy and spirit of optimism that provide badly needed oxygen to the debate. His voting record in Congress however wasn't nearly as progressive as his supporters think, and like Harris, he gives the impression that if elected anything is possible.

That brings us to former Delaware senator and vice president Joe Biden. Jill Filipovic, writing for The New York Times, asked the simple question, "Does Anyone Actually Want Joe Biden to Be President?" It was an emperor has no clothes moment. We're still waiting for the answer. Biden's apparent lead in the polls, for now, seems to be based on the notion that he is the Democratic candidate most likely to defeat Donald Trump. Not that anyone is particularly enthused about him or his candidacy.

The notion goes something like this: Biden is not the most popular candidate with his own base, but his base will hold their noses and vote for him because they are desperate to rid themselves of Trump, and because of his conservatism he will do well with conservative swing voters and win anyway. That's pretty tortured logic and pretty thin ice.

Conversely, Sanders and Warren not only have ideological solidarity and the enthusiastic support of the Democratic base, but are running as well if not better than Biden in critical swing states. #Enthusiasm matters. Presidential elections do not get won without it (ask Hillary Clinton). A groundswell of support is essential, not only to win the presidency but to carry the majorities in both houses of Congress necessary to accomplish anything legislatively.

While Sanders and Warren are the best known Progressive candidates vying for the 2020 Democratic presidential nomination, the Progressive vote is actually fractured among at least Sanders, Warren, Buttigieg, Harris, and O'Rourke.

This is creating a perception that Biden is leading the race. In fact, it is the Progressive policies and direction authored by Sanders and Warren and adopted by several rivals that are leading the race and have the greatest support from the Democratic base.

If it were just Sanders or just Warren, one Progressive would likely be leading the race. Rightly, the battle for the nomination should be between Sanders and Warren. They're both setting the tone Democratic/Progressive voters are most receptive to and the agenda for the campaign.

With Sanders, Warren, and Biden all running for the nomination and the Progressive vote divided, the policies the voters are most enthusiastic about are being overshadowed by what amounts to a red herring argument for elect-ability, for which there is scant substantiation.

Much to the dismay of Democratic/Progressive voters, Sanders and Warren don't interact particularly well. There is little communication or interaction between the two camps. They are natural allies behaving like ducks and cats. It may be the reason Joe Biden is still viable.

Related Topic(s): Bernie Sanders Presidential Campaign; Democratic; Presidency; Senator Elizabeth Warren, Add Tags
Add to My Group(s)
Go To Commenting
The views expressed herein are the sole responsibility of the author and do not necessarily reflect those of this website or its editors.