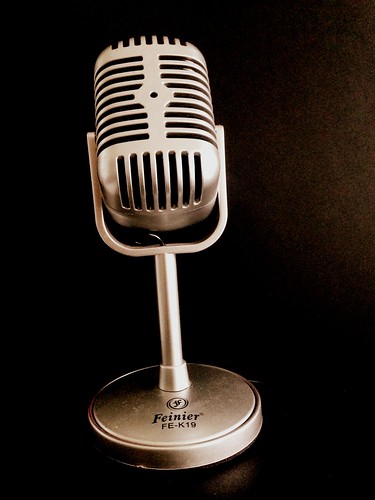 Microphone
(Image by bobtheproctor)   Details   DMCA
e 1960s, the CIA official Cord Meyer said the agency needed to "court the compatible left." He knew that drawing liberals and leftists into the CIA's orbit was the key to efficient propaganda. Right-wing and left-wing collaborators were needed to create a powerful propaganda apparatus that would be capable of hypnotizing audiences into believing the myth of American exceptionalism and its divine right to rule the world. The CIA therefore secretly worked to influence American and world opinion through the literary and intellectual elites.

Frances Stonor Saunders comprehensively covers this in her 1999 book, The Cultural Cold War: The CIA And The World Of Arts And Letters, and Joel Whitney followed this up in 2016 with Finks: How the CIA Tricked the World's Best Writers, with particular emphasis on the complicity between the CIA and the famous literary journal, The Paris Review. By the mid-1970s, as a result of the Church Committee hearings, it seemed as if the CIA, NSA, FBI, etc. had been caught in flagrante delicto and disgraced, confessed their sins, and resolved to go and sin no more. Then in 1977, Carl Bernstein wrote a long piece for Esquire "The CIA and the Media" naming names of journalists and media (The New York Times, CBS, etc.) that worked hand-in-glove with the CIA, propagandizing the American people and the rest of the world. It seemed, which is the intent of a "limited hangout," as if all would be hunky-dory now with the bad boys purged from the American "free" press. Seemed to the most naïve, that is, by which I mean the vast numbers of people who wanted to re-stick their heads in the sand and believe, as Ronald Reagan's team of truthtellers would announce, that it was "Morning in America" again with the free press reigning and the neo-conservatives, many of whom had been "converted" from their leftist views, running things in Washington.

So again it is morning in America this September 6, 2019, and the headline from National Public Radio announces the glad tidings that NPR has named a new CEO. His name is John Lansing, and the headline says he is a "veteran media executive." We are meant to be reassured. It goes on to say that Mr. Lansing, 62, is currently the chief executive of the government agency, The U.S. Agency for Global Media , that oversees Voice of America, Radio and Television Marti, and Radio Free Europe/Radio Liberty, among others. We are furthermore reassured by NPR that Lansing "made his mark in his current job with stirring defenses of journalism, free from government interference." The announcement goes on to say:

"Lansing has earned an advanced degree in political agility. At the U.S. Agency for Global Media, Lansing championed a free press even as leaders of many nations move against it.

'Governments around the world are increasingly cracking down on the free flow of information; silencing dialogue and dissent; and distorting reality,' Lansing said in a speech he delivered in May to the Media for Democracy Forum. 'The result, I believe, is a war on truth.'

He continued: 'Citizens in countries from Russia to China, from Iran to North Korea, have been victimized for decades. But now we're seeing authoritarian regimes expanding around the globe, with media repression in places like Turkey and Venezuela, Cambodia and Vietnam.'"

So we are reassured that the new head of NPR, the chief of all U.S. propaganda, is a champion of a free press.

Perhaps NPR will soon enlighten the American public by interviewing its new head honcho and asking him if he thinks Julian Assange and Chelsey Manning, by exposing America's war crimes, and Edward Snowden, by exposing the U.S. government's vast electronic surveillance programs of its own citizens, deserve to be jailed and exiled for doing the job the American mainstream "free press" failed to do. What NPR failed to do.

Perhaps they will ask him if he objects to the way his own government "interfered" in the lives of these three courageous people who revealed truths that every citizen of a free country is entitled to.

Perhaps not. Of course not.

Don't laugh, for the joke will be on you if you listen to NPR and its sly appeal to "liberal" sensibilities. If you are wondering why we have had the Russia-gate hoax and who was responsible (see/hear Russia expert Prof. Stephen Cohen here) and are now involved in a new Cold War and a highly dangerous nuclear confrontation with Russia, read Lansing's July 10, 2019 testimony before the House Appropriations Sub-Committee on State, Foreign Operations and Related Programs: "United Sates Efforts to Counter Russian Disinformation and Malign Influence."

Here is an excerpt:

"USAGM provides consistently accurate and compelling journalism that reflects the values of our society: freedom, openness, democracy, and hope. Our guiding principlesenshrined in laware to provide a reliable, authoritative, and independent source of news that adheres to the strictest standards of journalism".

Russian Disinformation. And make no mistake, we are living through a global explosion of disinformation, state propaganda, and lies generated by multiple authoritarian regimes around the world. The weaponization of information we are seeing today is real. The Russian government and other authoritarian regimes engage in far-reaching malign influence campaigns across national boundaries and language barriers. The Kremlin's propaganda and disinformation machine is being unleashed via new platforms and continues to grow in Russia and internationally. Russia seeks to destroy the very idea of an objective, verifiable set of facts as it attempts to influence opinions about the United States and its allies. It is not an understatement to say that this new form of combat on the information battlefield may be the fight of the 21st century."

Related Topic(s): Assange; Disinformation; Liberals; Manning; National Intelligence Command; National Public Radio NPR; Propaganda; Snowden, Add Tags
Add to My Group(s)
Go To Commenting
The views expressed herein are the sole responsibility of the author and do not necessarily reflect those of this website or its editors.