"God has given  sooo  much information in the Bible about this, and so many proofs, and so many signs, that we know it is  absolutely  going to happen without any question at all.   - Harold Camping

When the End Times come, I want to be living in Kansas. It's always twenty years behind."  - Mark Twain 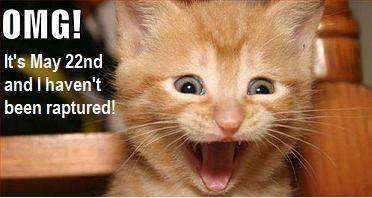 Sunday, May 22nd, 10:15AM, families in church pews singing praises of the Lord very languidly, with  no exuberance at all. They've gathered in churches out of fright and despair. The day before, a few people they knew had disappeared - in broad daylight!  It happened! It actually happened! Old Harold Camping was RIGHT!!

After the initial worldwide chaos, all those worshipers had come to the realization that they had been "left behind," and their fate was sealed: in six months, their bodies and souls would cease to exist. No hell, but no heaven either. That's the way Camping envisioned it. Why were they singing hymns at all? Maybe hope, maybe habit. The cruelty of it all was still impossible to comprehend: only 3% of the population were raptured. What was wrong with the other 97%?

Yes, it's an odd scenario that focuses on the torture to come: billions of people left on earth, knowing that in six months they would cease to exist. Of course, it's not the only picture of the End: so many elements and permutations make for an interesting (if confusing) mix-and-match game: the Rapture, pre-millenialism, post-millenialism,  Armageddon are but a few. But no matter what the eschatology, they all involve the End of the World, a Judgment of human beings, unification with God (heaven) or separation from God (hell or non-existence) all with a heavy dose of ... sadism. One wonders if God created man just to toy with him like some cruel child: whatever the outcome of the World, somebody, some soul will suffer.

Gone Are The Sandwich Boards 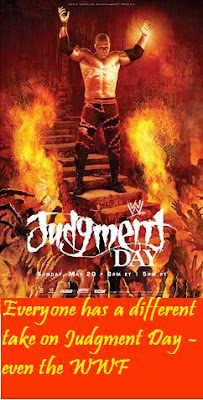 "REPENT! THE END IS NEAR!" When's the last time you saw some sad, unkempt person wearing front-and-back placards declaring the end of the world? Most of them have been retired to YouTube heaven and they've been replaced by young people in tee-shirts with handouts or misspelled signs held by very in-your-face adherents. Today's End Timers seem more definite, more aggressive, and more condescending than sandwich board messengers. Why? Is it because they know they will be going to heaven very soon? Or is it because they know you won't be going to heaven (unless you listen to them and act quickly)? Watch the 40-second video at the bottom and wonder why the young man has such fervor in his voice and stance. When asked what he will do if the world still exists on May 22nd, he is absolutely certain that THERE WILL BE NO MAY 22nd! The force at which he puts up a mind-block to any alternative is unsettling.

Of course, websites like The End.com and  End Time Ministries also exude a matter-of-fact quality about a Second Coming, but they merely act as enablers to a group that is going one step further: naming an actual date.

I realize that calling today's End Timers cruel and sadistic may be going too far, but not far enough for people who actually push for Armageddon, e.g. the followers of Pastor John Hagee. His group, CUFI (Christians United For Israel), actually rallies for the concept of Armageddon. In the video below, the actions of the faithful seem almost surreal: they're so very happy that an Israeli-Palestinian conflict would bring about their cherished Armageddon, they seem oblivious to the fact that they are inciting a war, with people dying in the process.  Former U.S. Representative Tom DeLay looks almost giddy at the prospect of a cataclysmic war.

So what will happen to the May 21st End Timers on May 22nd? Will they experience profound disillusionment? Will they be ridiculed mercilessly? Will they switch to another date? I fear the answer to all three questions is a resounding "yes". We are experiencing people who (badly) need  a vast and spectacular change in their lives and who cannot deal with the human condition, whether in themselves or others. In other words, they will always want the End Time to come in their lifetime: be it in the form of the Rapture, the Second Coming, the Four Horsemen of the Apocalypse or whatever, End Timers will always strive for an immediate vindication, a current vengeance, a present emotional and physical relief with something as universal as religion.

Past "signs" of the End Time show us just how desperate people are when they put their beliefs and their hopes for a cataclysmic change on the line:

Mormon: Babylon will be established and fall, Rev. 17-18.

Rev. Dan Vojir is has been writing/blogging on religion and politics for the better part of ten years. A former radio talk show host (Strictly Books " Talk America Radio Network) and book publisher, Dan has connected with some of the most (more...)
Related Topic(s): Armageddon; DeLay Tom; End Times; God; Harold Camping; Hell; Religion; Torture, Add Tags
Add to My Group(s)
Go To Commenting
The views expressed herein are the sole responsibility of the author and do not necessarily reflect those of this website or its editors.