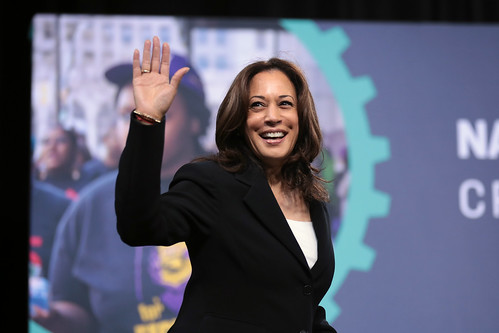 We're in the Kamala Harris era now, and so far, so good. Of the four people on the major-party Presidential tickets, she appears to be the most energetic and normal. I've never met Harris, but I did spend a number of days sitting next to her sister Maya when we both served on the 2016 Democratic platform-drafting committee. Maya Harris was tack-smart and tightly focussed, which appears to run in the family. Listening to Joe Biden speak, I feel a constant mild apprehension about what may emerge; Harris relaxes me.

Given the very real possibility that she'll be at or near the pinnacle of our politics for somewhere between four and 16 years, it's worth asking how she will handle the gravest crisis that looms over our planet. That's not the same as asking if she should be elected, because, on climate issues, a shrink-wrapped pallet of frozen Ore-Ida French fries would be a vast improvement on the incumbent. But it's going to take an unflinching, unrelenting effort to transform America's energy system and lead a similar process globally. Is she committed to that?

Her defenders point to a number of powerful statements that she made over the course of her Presidential primary campaign. She'd eliminate the filibuster to pass a Green New Deal. She'd tell the Department of Justice to investigate oil and gas companies. "When you take away that money because you take them to court and sue them, as I have done, it's extraordinary how they will change behaviors," Harris said. "Maybe this is the prosecutor in me. They have to be held accountable." Harris has been particularly outspoken about environmental injustice: just six days before she got the V.P. nod, she joined Alexandria Ocasio-Cortez to introduce the Climate Equity Act, which, as the Times explained, "would create a dedicated Office of Climate and Environmental Justice Accountability within the White House and require the federal government to rate the effect that every environmental legislation or regulation would have on low-income communities."

If there's a rub, it's that, to date, she hasn't been that eager to really stand up to power on this issue. During a forum last year, Harris said that she had sued ExxonMobil over its climate denial, but that's not true. After investigative reporters showed that company executives had spent decades lying about their knowledge of climate change, many state attorneys general announced investigations. Only two, however, actually went to court: New York, under Eric Schneiderman and his successors, and Massachusetts, under the very gutsy Maura Healey. Harris, in California, investigated but never pulled the trigger -- a grave disappointment to environmentalists, who knew that the country's most economically powerful state would have been a useful ally.

Such reluctance is not admirable, but it is perhaps understandable: California is an oil state, if less so than it used to be, and the big oil companies are major players in its politics in a way that isn't true in New York or Massachusetts. Harris sued oil companies in California for local pollution, but those aren't existential attacks on the industry, the way the climate litigation against ExxonMobil would have been. So she punted, in the best case because she wanted to live to fight another day. What will she do if she becomes Vice-President? I imagine that her courage will depend on the climate movement's success in eroding the political power of the oil companies. The weaker the fossil-fuel conglomerates become, the less scary they are. (Oil barons understand this, which is why they're spending large sums to reëlect Trump). My guess is that Harris is a run-of-the mill politician, who will go where the footing is easiest. That's less attractive than principled and unbending leadership, because that means movements can't demobilize after Election Day. The pushing never ceases. (I'm a Bernie guy.)

When politicians are weathervanes, you need to make the wind blow. And the wind is blowing in Washington and in the Atlantic, where, last week, we reached the letter "K" in the hurricane naming list 10 days earlier than ever before. Earlier this week, for instance, there was a kerfuffle after the D.N.C. dropped from its platform a pledge to end fossil-fuel subsidies. Within 24 hours, a spirited response from disappointed environmentalists produced a new pledge from the Biden campaign that his commitment hadn't wavered, and that he indeed planned on "rallying the rest of the world" to do likewise. That's politics in action. Or consider one closely watched Democratic Senate primary: on September 1st, Massachusetts voters will decide between the incumbent, Ed Markey, and the challenger, Joseph Kennedy III. When the race began, Kennedy had a big lead in the polls, based largely on his last name and his Disney Hall of Presidents resemblance to its most famous bearer. But Markey (whom I admire, and have worked with on environmental legislation) fought back. And he did it largely on the strength of his climate credentials. Markey is the Senate sponsor of the Green New Deal, and his House counterpart, Ocasio-Cortez, cut a nifty ad for him.

The latest polling shows that the 74-year-old has moved ahead of the 39-year-old political scion, largely thanks to a 51 percent lead among 18- to 29-year olds. Teen Vogue, which has become must-read political journalism, wrote that Markey is "the subject of countless stan accounts. His outfits go viral. Teens cling to his every word." (Note to Joe Biden.) The Sunrise Movement -- the group of under-thirties who organized the sit-in at House Speaker Nancy Pelosi's office that served as a coming-out party for the Green New Deal -- produced a YouTube video for Markey last week, which may be my favorite political ad of all time. (Watch till the end for one of the best knife twists in campaign history). If Markey wins, he will go back to the Senate a national progressive hero; more to the point, he will have demonstrated that truly taking on climate change can pay off politically. That lesson won't be lost on anyone, Harris included.

Michelle Wu has been a Boston city councillor since 2013, when (at the age of 28) she became the first Asian-American woman to hold the job. In 2016, her colleagues elected her city-council chair, and she was the first woman of color to hold that post. She recently introduced plans for a city-scale Green New Deal -- and her team is working to make it a template for cities worldwide.

If we don't do anything about climate change, what's Boston going to look like in 50 years? Give us a little tour of the city's landmarks and neighborhoods.

Thanks to local researchers, we have a pretty clear picture of where we're headed under business as usual. Most of Boston's downtown area was created through huge landfill projects in the eighteen-hundreds, so we're really vulnerable to flooding, as storms intensify and the ocean takes back this low-lying, man-made land. By 2070, with more than three feet of sea-level rise, you'll be paddling the Freedom Trail by kayak. During Nor'easters, Boston Harbor will spill over nearly a mile to the Chinatown Gate. But what should really move us to action is the suffering and displacement we'd face in our neighborhoods. As luxury condo buildings of the Seaport and other areas are abandoned, because they'll be underwater every day at high tide, safe and dry areas will become unaffordable for many. When every day of summer is hotter than ninety degrees, outdoor workers and residents who can't afford air-conditioning will face extreme risk. Already wide racial and economic disparities will grow, as communities of color and low-income families bear the brunt of these costs and injustices.

Bill McKibben is the author of a dozen books, including The End of Nature and Deep Economy: The Wealth of Communities and the Durable Future. A former staff writer for The New Yorker, he writes regularly for Harper's, The Atlantic Monthly, and The (more...)
Related Topic(s): Climate Change; Corona Virus Coronavirus Covid-19; Crisis; Democratic; Environmentalists; Kamala Harris; Oil, Add Tags
Add to My Group(s)
Go To Commenting
The views expressed herein are the sole responsibility of the author and do not necessarily reflect those of this website or its editors.