Source: The Guardian
Media outlets have awakened to the serious threats posed to journalism, but show little sign of doing anything about it 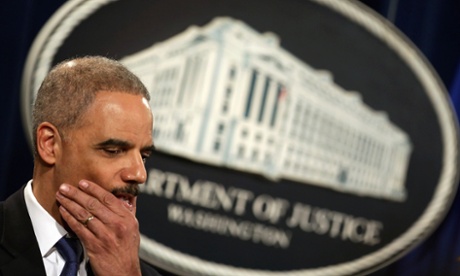 Media outlets and journalists have finally awakened to the serious threat posed by the Obama administration to press freedoms, whistle blowing and transparency. Apparently, what was necessary for them to be prodded out of their slumber was watching people they perceive as "one of them" have their emails secretly seized and be accused of serious felonies. The question now: what, if anything, will they do to defend the press freedoms they claim to value? By design, there are many options the press corps has for thwarting government attacks like these. Doing so requires a real adversary posture, renouncing their subservience to government interests and fear of alienating official sources. It remains to be seen whether any of that will happen.

What is clear is that, after the AP and especially the Fox/Rosen revelations, a real tipping point has been reached in establishment media circles in terms of how all of this is discussed. One now regularly encounters in the most mainstream circles rhetoric that, a short time ago, was the province of a small number of critics.

The New York Times editorial page warned last week that "the Obama administration has moved beyond protecting government secrets to threatening fundamental freedoms of the press to gather news." The Washington Post's Dana Milbank wrote that the Obama DOJ is "treat[ing] a reporter as a criminal for doing his job" and is thus "as flagrant an assault on civil liberties as anything done by George W. Bush's administration, and it uses technology to silence critics in a way Richard Nixon could only have dreamed of."

So extreme is the revealed conduct that even the most conventional cable news chatterers, such as MSNBC's Chuck Todd, were able to process its significance: "They want to criminalize journalism," Todd noticed, adding: "if George Bush and Dick Cheney were doing this, imagine what candidate Obama would say. Candidate Obama would be unloading." The former long-time executive editor of the Washington Post, Leonard Downie, wrote that "the Obama administration's steadily escalating war on leaks" is "the most militant I have seen since the Nixon administration," and "has disregarded the First Amendment and intimidated a growing number of government sources of information -- most of which would not be classified -- that is vital for journalists to hold leaders accountable."

Related Topic(s): Attacks On Journalists Media; Email; Eric Holder, Add Tags
Add to My Group(s)
Go To Commenting
The views expressed herein are the sole responsibility of the author and do not necessarily reflect those of this website or its editors.